Return to the hood 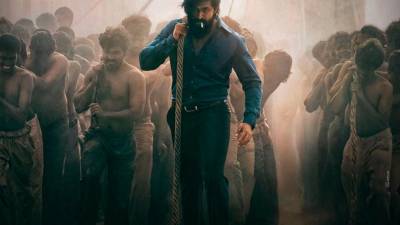 PRASHANTH Neel returns as a screenwriter and director for KGF: Chapter 2, starring Yash as Rocky, a kindhearted criminal. The original film was about a young boy who arrives in Bombay and becomes a notorious criminal. He is then taken to Karnataka, where he becomes much more famous: he becomes the savior of the KGF people, a hidden mining town.

Before diving into the action, chapter 2 begins with a recap that informs the viewer of key moments and characters from the previous film. Picking up where the story left off, Rocky (Yash) took control of the KGF, with all the power and people on his side. He now has bigger fights ahead of him, as Adheera (Sanjay Dutt), who was believed to be dead, tries to take control of the gold field.

Rocky’s companions in the first chapter, however, turned against him and they too set their sights on the throne. Additionally, Ramika Sen (Raveena Tandon), the Prime Minister, proclaims Rocky the most wanted criminal in India and goes after him.

Rocky’s apparent heroism to the KGF people is now eroding. It looks like he’s getting greedy, bringing workers to breaking point, but there’s something more going on that we don’t learn about until much later. The premise of the film revolves around how Rocky handles all of these challenges and whether or not he retains control over KGF.

Chapter 2 is chock full of self-exhilarating dialogue, dizzyingly edited and interpreted action sequences, and plenty of slow-motion looks of Rocky’s unmistakably stylish 70s dress and flowing hair. This film is entirely dedicated to the star’s celebration of him.

Sanjay Dutt has a great start and then hits big with some stacking shots at the end. Raveena Tandon, a talented actress, is introduced in the second half of the film and does a great job as a high-impact character with Yash. Although she arrived late in the story, she leaves an indelible mark.

The role of the lead actress, Srinidhi Shetty, seems to be inadequate at first, but it gets better midway through the film.

Of course, the soul of the film is the music. Ravi Basrur’s background soundtrack is loud enough, but it increases the intensity. It lifts the overall mood and offers a good level of tension. Bhuvan Gowda’s photography is commendable. The picture has a modern, world-wide feel and does not appear to be a provincial film.

KGF: Chapter 2 stays true to its prequel, genre, storyline, and goal. The climax is cathartic if you can get into it and get to the end. Not only does the film overwhelm you with brilliantly imagined moments, it also has room for an emotional narrative about a mother and baby who never had the luxury of hoping.