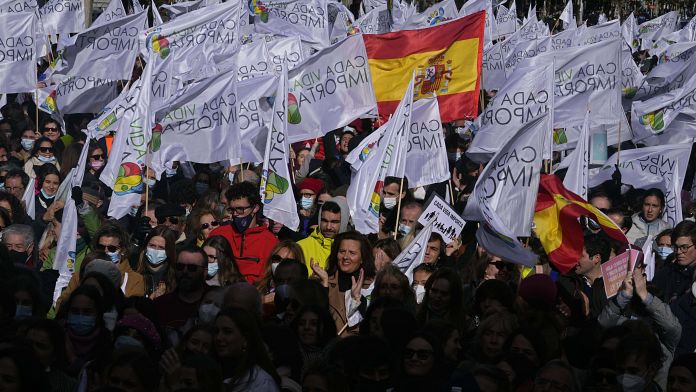 Spain’s Senate has approved a new law that could see activists convicted for “harassing” women going for an abortion.

Citizens will not be able to try and convince women against abortions through “embarrassing, offensive, intimidating or pressurising acts”.

Those found guilty could face between three months and one year in prison or community service.

Lawmakers said the new legislation will prevent women from being blocked from “exercising the right to voluntary interruption of pregnancy”.

But anti-abortion activists protested outside the Senate on Wednesday to condemn the “criminalisation” of their activities.

According to a 2018 report by the Association of Authorised Abortion Clinics (ACAI), 89% of women seeking abortions in Spain have felt harassed and 66% said they felt threatened.

Abortion was decriminalised in Spain in 1985 but only on the grounds of rape, where there is a “serious physical or psychological risk” to the woman, or if the foetus is malformed.

In 2010, the EU country then broadened the law by legalising abortion without medical justification within 14 weeks of pregnancy. Those aged under 18 must also provide parental consent before getting an abortion.

In Spain, women sometimes have to travel hundreds of kilometres to have an abortion because of the lack of specialised services.