The world faces “the dark hour,” Biden said at the Asian summit as Indian Modi remains silent on Russia 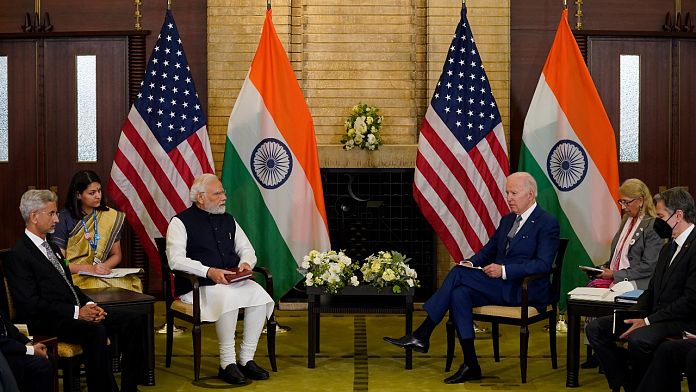 President Joe Biden told fellow Indo-Pacific leaders gathered for a four-country summit in Tokyo on Tuesday that they were going through “a dark hour in our shared history” due to Russia’s brutal war against Ukraine.

He urged the group to make a greater effort to stop Vladimir Putin’s aggression. “This is more than just a European question. It’s a global issue, “Biden said as the” Quad “summit with Japan, Australia and India kicked off.

Made up of the United States, Australia, India and Japan, the regional group is seen as a counterweight to Chinese influence in the region. This is the second face-to-face meeting of the four leaders in less than a year.

The message from the president of the United States seems to have been reported, at least in part, to Indian Prime Minister Narendra Modi. Unlike other Quad countries and almost all other US allies, India has not imposed sanctions or condemned Russia, its main supplier of military hardware.

Biden said the world has a shared responsibility to do something to help the Ukrainian resistance against Russian aggression.

“We are going through a dark hour in our common history,” he said. “The brutal and unprovoked Russian war against Ukraine has triggered a humanitarian catastrophe and innocent civilians have been killed in the streets and millions of refugees are internally displaced as well as in exile.”

“The world has to face it and we are,” he added.

Watch the interview with Professor Scott Lucas in the video player above.

For many of the major Asian powers, the invasion was seen as a pivotal time for the world to demonstrate with a strong response to Russia that China should not seek to seize disputed territory through military action.

Japanese Prime Minister Fumio Kishida, taking note of the Russian aggression in Ukraine, told other leaders: “We cannot allow the same thing to happen in the Indo-Pacific region.”

A reminder of the tensions in the region came during Biden’s trip. On Tuesday, Chinese and Russian strategic bombers conducted joint flights around Japan.

Japanese Defense Minister Nobuo Kishi described the exercise as a “threat” and “an increased level of provocation” and said cooperation between China and Russia was “worrying and unacceptable”.

The White House has been expansive in praising several Pacific countries, including Japan, Singapore and South Korea, for coming forward to strike Russia with severe sanctions and export bans by offering humanitarian and military assistance to Kiev.

However, the White House was disappointed by the relative silence of India, the largest democracy in the world.

After an individual meeting with Modi in Japan, Biden said he had discussed the Russian invasion of Ukraine “and the effect it has on the entire global world order.”

But reflecting on India’s relations with Moscow, the Quad leaders’ post-summit joint statement made no mention of Russia.

The Indian prime minister has not publicly pledged to get rid of Russian oil, and Biden has publicly called India “a bit shaky” in his response to the invasion.

Faced with Western pressure, India condemned the deaths of civilians in Ukraine and called for an immediate cessation of hostilities. Yet it has also exacerbated the aftermath of a war that caused a global food shortage by banning grain exports at a time when hunger is a growing risk in some parts of the world.

The summit came on the last day of Biden’s five-day visit to Japan and South Korea, Biden’s first trip to Asia as president.