Phil Mickelson: PGA Tour shouldn’t be allowed to ban me 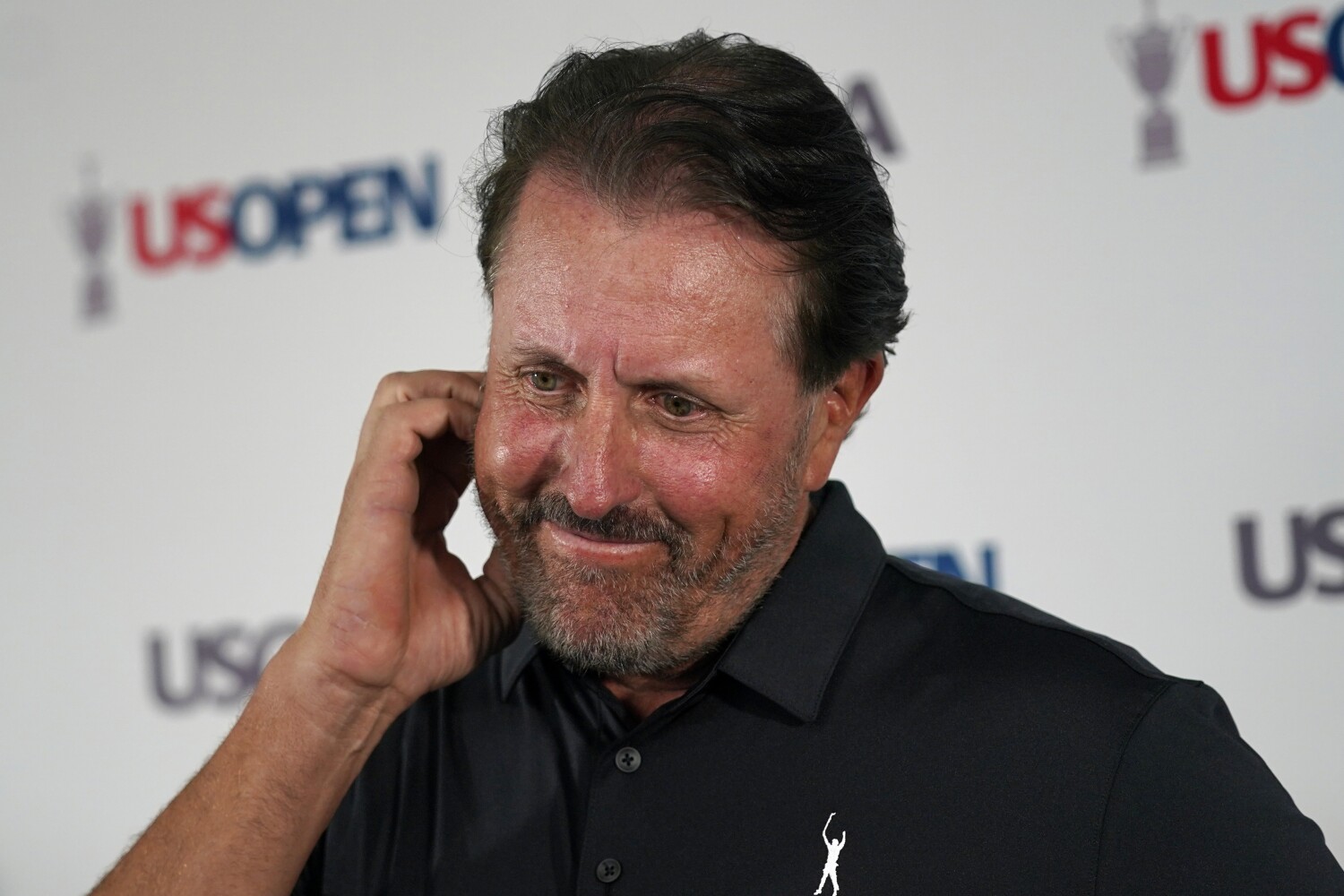 Phil Mickelson, a master of the short irons, suddenly finds himself in the middle of golf’s biggest wedge issue.The six-time major champion has been suspended by the PGA Tour for playing in a rival league event — he’s a marquee attraction of the Saudi-backed LIV Golf series — yet he believes it should be his choice as to whether he will play in another tour event.“My preference is to be able to choose which path I would like, one or the other or both,” Mickelson said Monday in his news conference leading into this week’s U.S. Open, his first competition on American soil in more than four months.The storied tournament, which begins Thursday, will take place at The Country Club in Brookline, Mass. The U.S. Open, run by the U.S. Golf Assn., is the only major event standing between Mickelson and a career Grand Slam.Mickelson reportedly received $200 million just for joining the upstart LIV Golf league and, along with Dustin Johnson and more than a dozen other stars of the game, has been sharply criticized for joining an organization backed by a repressive regime.Without permission from the PGA Tour, the group played in an inaugural LIV Golf event last week outside London, leading to the tour suspensions and resignations. Mickelson argued Monday that given his lifetime status on the tour, it should be his decision whether to play in future tour events.“I’ve worked hard to earn a lifetime membership,” he said. “I’ve worked hard to give back to the PGA Tour and the game of golf throughout my 30-plus years of professional golf, and I’ve earned that lifetime membership, so I believe it should be my choice.”Justin Thomas, who last month won the PGA Championship, said he wasn’t surprised by the decision of fellow competitors to defect to LIV Golf but is concerned about the effect it will have on the game. Phil Mickelson looks on from the 16th tee Saturday during the final round of the inaugural LIV Golf Invitational at the Centurion Club in St. Albans, England.(Alastair Grant / Associated Press) “I tossed and turned and lost a lot of sleep last week thinking about what could potentially happen,” Thomas said. “I grew up my entire life wanting to play on the PGA Tour, wanting to break records, make history, play Presidents Cups, play Ryder Cups.“The fact that things like that could potentially get hurt because of some of the people that are leaving, and if more go, it’s just sad. It’s really no other way to say it. It just makes me sad.”According to a New York Post report, a coalition of families and survivors of the 9/11 terrorist attacks sent an excoriating letter to representatives of Mickelson, Johnson, Bryson DeChambeau, Patrick Reed and other LIV Golf defectors accusing them of betraying their country. Fifteen of the 19 hijackers in 2001 were Saudi citizens. The letter was written by Terry Strada, whose husband boarded a plane in Boston that was flown into the World Trade Center.“I would say to the Strada family, I would say to everyone that has lost loved ones, lost friends on 9/11 that I have deep, deep empathy for them,” Mickelson said. “I can’t empathize that enough.”Mickelson said he plans to play in the British Open at St. Andrews next month but otherwise his schedule is yet to be determined.Asked what he’s getting from LIV Golf that the PGA Tour doesn’t provide, he cited the “incredible financial commitment” and fewer tournaments, which “allows me to have more balance in my life.“It allows me to do things that are off the golf course I’ve always wanted to do.”