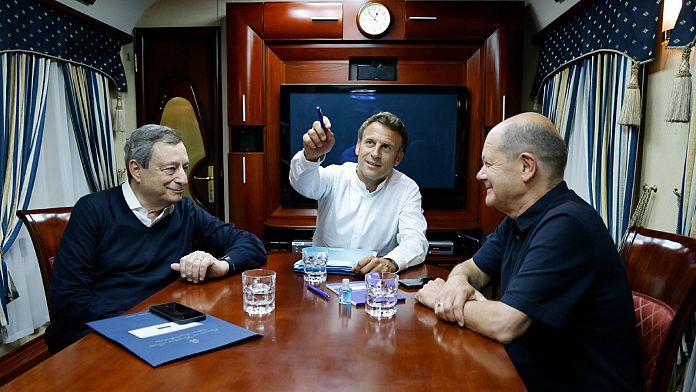 The European Union’s political heavyweights were en route for Kyiv on Thursday morning in a bid to underscore Europe’s support for Ukraine. France’s president, Emmanuel Macron; Germany’s chancellor, Olaf Scholz; and Italy’s prime minister, Mario Draghi set off for the Ukrainian capital on an overnight train on Wednesday. The trip marks a first for the heads of the EU’s three largest economies. Neither have yet visited Ukraine since the Russian invasion in February, with Scholz and Macron heavily criticised at home for not visiting the war-torn country earlier.Ukrainian president Volodymyr Zelenskyy will meet the trio for discussions, with military assistance and Ukraine’s bid to join the EU topics likely high on the agenda. “I think we are at a time when we, the European Union, need to send clear political signals to Ukraine and the Ukrainian people in a context where they have been resisting heroically for several months,” said Macron, while visiting a NATO base in Romania on Wednesday where some 500 French troops are deployed. All three countries are broadly in favour of Ukraine joining the bloc, albeit to varying degrees.A decision on whether the war-torn country can gain EU candidacy status is expected at a European summit on 23-24 June. If successful, this will start a negotiation process to become a bona fide member state, which may take several years. Macron, who followed his visit to Romania with a trip to Moldova, which has also put in a bid for EU membership, told reporters in Chișinău that “my hope is that we can send a positive message to this request”, adding that “Moldova should not be dissociated from Ukraine”.He also once more championed his idea to create a European political community that both countries could join as the process for membership — which can take years — is underway which he said could “provide short-term responses to security” and infrastructure issues.”We can, we must define mutual security guarantees” to European countries not in the EU, he also said.Zelenskyy is expected to reiterate Ukraine’s request for more heavy weaponry to repel Russian advances in the east at today’s meeting. There had been speculation earlier this week that the EU leaders would visit Ukraine, with Macron not confirming if the trip would take place when asked by reporters.Major German and Italian media outlets, including Germany’s ZDF and Italy’s Repubblica, published a photo of the three leaders on the train Thursday morning.