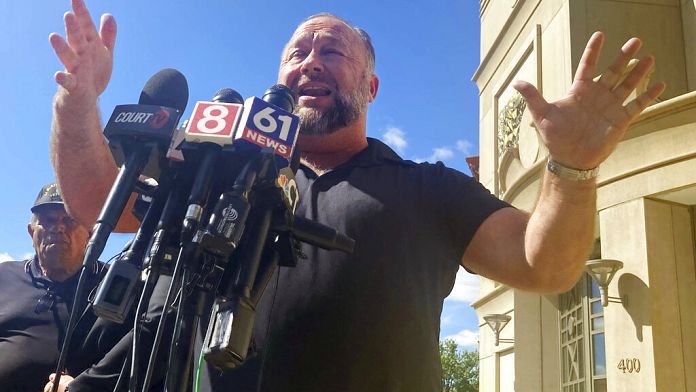 A US jury in Connecticut ruled that conspiracy theorist Alex Jones should pay $ 965 million to the people who suffered for his lies about the Sandy Hook Elementary School Massacre.

The verdict is the second major judgment against the Infowars host over his relentless promotion of the lie that the mass shooting of the 2012 tragedy never happened.

Jones said the bereaved families seen in the news coverage were actors hired as part of a plot to take away people’s guns.

The decision is the result of a lawsuit filed by relatives of five children and three educators killed in the massacre, plus an FBI agent who was among the first responders at the scene. In August, a Texas jury awarded nearly $ 50 million to the parents of another murdered child.

Robbie Parker, who lost his 6-year-old daughter, Emilie, said outside the Connecticut court that he was proud that “what we were able to accomplish was simply to tell the truth.”

Jones was not present at court but reacted to his Infowars program.

Because the courtroom video showed plaintiffs’ names read along with jury awards to each, Jones said he himself had never mentioned their names.

“All made up. Hilarious,” he said. “So this is what a sham trial looks like. I mean, this is the completely out of control left.”

The trial featured tearful testimony from parents and siblings of the victims, who recounted how they were threatened and harassed for years by people who believed the lies told on the Jones show.

Strangers showed up in their homes to register them. People have launched abusive comments on social media. Erica Lafferty, the daughter of Sandy Hook principal’s murdered Dawn Hochsprung, testified that people sent rape threats to her home. Mark Barden recounted how conspiracy theorists had urinated on the grave of his 7-year-old son, Daniel, and threatened to unearth the coffin.

“I wish after today, I can just be a daughter crying my mother and stop worrying about conspiracy theorists,” Lafferty said outside the courtroom. But she predicted that “Jones’s hatred, lies and conspiracy theories will follow both me and my family for the rest of our days.”

For plaintiff William Sherlach, the verdict “shows that the Internet is not the Wild West and that your actions have consequences.”

He testified that he saw posts online that falsely postulated that the shooting was a hoax, that his murdered wife, school psychologist Mary Sherlach, never existed; that she was part of a financial cabal and was somehow involved with the school killer’s father; and more. He told jurors that the vitriol of the shooting deniers made him worry about the safety of his family.

“Moving forward – because, unfortunately, there will be more horrific events like this – people like Alex Jones will have to rethink what they say,” Sherlach said.

Testing during the trial, Jones acknowledged that he was wrong about Sandy Hook. The shooting was real, he said. But both in the courtroom and on his show, it was provocative.

He called the case a “kangaroo court,” mocked the judge, called the plaintiffs’ lawyer an ambulance chaser, and labeled the case an affront to free speech. He claimed it was a conspiracy by the Democrats and the media to silence him and put him out of business.

Twenty children and six adults died in the shooting last December. 14, 2012. The libel trial took place at a Waterbury courthouse, about 20 miles from Newtown, where the attack took place.

The lawsuit accused Jones and Infowars’ parent company Free Speech Systems of using mass killings to build its audience and make millions of dollars. Experts have tested that Jones’s audience grew when he made Sandy Hook a topic on the show, as did his income from product sales.

In both the Texas and Connecticut cases, the judges held the company liable for damages for non-performance after Jones failed to cooperate with the court’s rules on sharing evidence, including failure to deliver documents that could have proved if Infowars had benefited from knowingly spreading disinformation about mass murder.

Because he had already been held accountable, Jones was prevented from mentioning free speech rights and other topics during his testimony.

Jones now faces a third trial, in Texas later this year, in a lawsuit filed by the parents of another child killed in the shooting.

It is unclear how much of the verdicts Jones can afford to pay. During the trial in Texas, he tested that he could not afford a judgment in excess of $ 2 million. Free Speech Systems has filed for bankruptcy protection. But an economist found in the Texas case that Jones and his company were worth up to $ 270 million.

“He is walking in the shadow of death to try to profit from the shoulders of people who have just been devastated,” Koskoff said. “This is not a business model that should be sustainable in the US.”