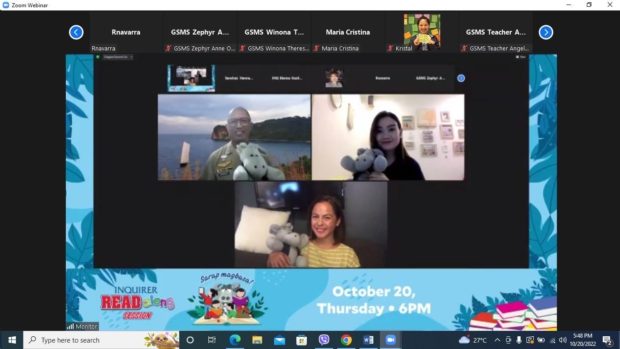 The program, which aired live on the Inquirer and Metrobank Facebook pages, began with an opening message from Kristal T. Batino, senior program officer of the Metrobank Foundation’s Excellence Awards Unit.

Aguila has read “Ayokong Pumasok sa Paaralan” by Rene O. Villanueva, the story of a bee who initially refuses to go to school and of his mother who convinces him that he can have more fun in school life.

Aguila, a Filipino teacher at the main campus of Philippine Science High School in Quezon City, came from a family of teachers. You have spent nearly half of your life defending the Filipino language and culture in education.

Cabanlet read the life story of First Class Soldier (PFC) Nestor Acero, a Marine who died in 1972 during a battle with Muslim outlaws in Sibalo Hill, village of Punay, Sulu and received a (posthumous) Medal of Valor for sacrificed his life to take care of his wounded comrades and to cover the withdrawal of the rest of the troops.

Cabanlet, himself a decorated Marine, devoted 29 years of his life to military service and helped promote peace and prosperity on the war-affected island of Sulu and nearby towns. He now serves as Assistant Chief of Staff of the Unified Command for Operations in the Western Command in Puerto Princesa, Palawan.

Valdez read Ompong Remigio’s “Yaya niya, Nanay ko”, the story of a little girl’s love for her mother who works as a nanny for another child.

Valdez juggles being a mother to her 14-year-old daughter with her intense acting career and her pastry business where she makes and sells her sweet cake creations.

Launched in 2007, Inquirer Read-Along is a corporate social responsibility project of the publishing house that aims to promote a love of reading among children.

Inquirer Read-Along: Children learn about the power of courage and kindness