Fact check: A Ukrainian soldier did not pose next to a Russian fighter’s corpse 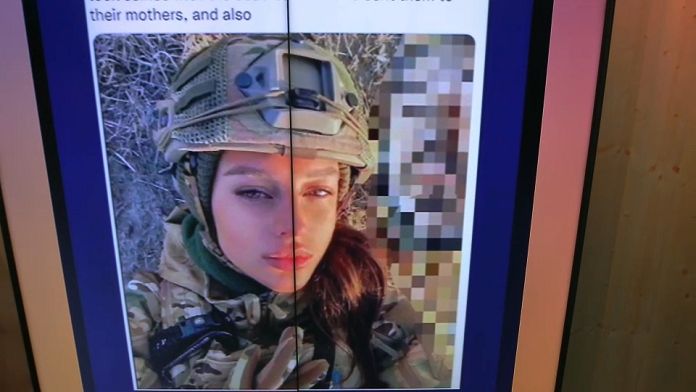 As Russia’s invasion of Ukraine hits the 11-month mark, Euronews continues to debunk the disinformation warfare that’s taking place on-line.Many social media customers have shared a photograph on Twitter claiming {that a} Ukrainian soldier could be seen posing subsequent to a useless Russian fighter’s physique. It has been shared in a number of languages, together with Spanish and Italian.These posts declare that the girl within the picture’s identify is “Lilia Yevtushenko”, purportedly a “Ukrainian soldier who had been captured by the Russian military”.Twitter customers claimed she took photos subsequent to useless Moscow troops so that they might be despatched to the moms of Russian troopers as a warning.Utilizing instruments such because the reverse picture search, Euronews discovered the unique picture on this article, printed by the Ukrainian information outlet Gazeta.The article states her actual identify shouldn’t be “Lilia Yevtushenko” however reasonably Oleksandra Samsonova, a 23-year-old sniper of the Armed Forces of Ukraine.As well as, Ukraine’s **Elle journal**franchise wrote a profile of Samsonova again in July 2022. The profile had even Ukrainian officers — akin to advisor to the Minister of Inner Affairs of Ukraine Anton Geraschenko — retweeting the article, confirming Oleksandra’s id.Euronews additionally discovered Samsonova’s private Instagram profile and the unique picture that has been doctored.Samsonova shouldn’t be pictured subsequent to a corpse, and the picture was taken again in March 2021 — 11 months earlier than Russia’s invasion of Ukraine.Furthermore, her final submit — printed on 21 January, the place she is asking for donations to the Ukrainian defenders in Bakhmut — doesn’t add as much as the claims that she has been captured by the Russian military. Beneath the picture that includes two Ukrainian troopers whose faces had been blurred, Samsonova answered a remark from a fearful follower by saying, “Don’t imagine the Russian propaganda, I’m alive.”