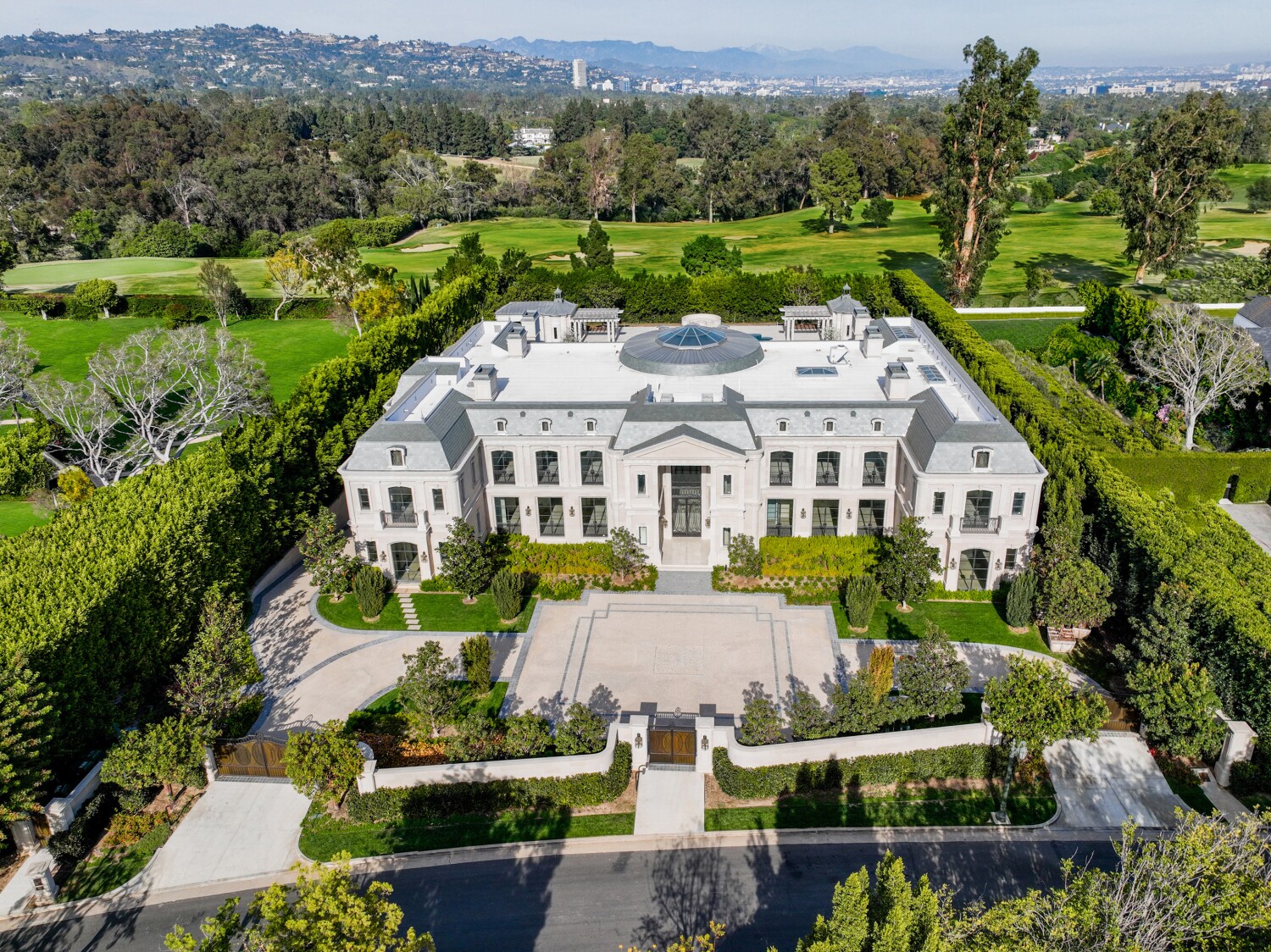 For sale: a French chateau-style mansion in one of Los Angeles’ most exclusive neighborhoods, Holmby Hills, complete with 11 bedrooms, 27 bathrooms and an asking price of $63.5 million.At 33,652 square feet, it is among the largest homes on the market in Southern California, but there are a few hitches. For one, the interior is not yet finished. And, this week, federal prosecutors in Los Angeles moved to seize the estate, alleging that it was the fruit of corruption involving a powerful Armenian politician and his children.The U.S. Department of Justice outlined in a court filing how the property on South Mapleton Drive — a few doors down from the Playboy Mansion — was purchased in 2011 for $14.4 million with bribes to the family of Gagik Khachatryan, Armenia’s former minister of finance, from a prominent businessman there.Khachatryan, 66, his two sons and the businessman are all facing criminal charges in Armenia; the businessman is accused of providing more than $20 million in bribes. An attorney representing WRH Inc., the company that owns the home, did not respond to a message seeking comment.The Holmby Hills property went on the market April 7, with real estate agency Hilton & Hyland heralding its “immaculate architecture, manicured landscaping, and your chance to completely customize the interiors.” The backyard of the Holmby Hills mansion, which went on the market in April.(Hilton & Hyland) The listing agent, Richard Maslan of Hilton & Hyland, told The Times that a potential buyer will be able to finish the home in the style of their choosing. He maintained that he is still looking for a buyer.“I’ve been told by the FBI that I can continue to do showings,” Maslan said. “If we receive an offer and both the seller and the Justice Department agree on a sale price, we can still sell it.”The saga of the residence begins in 2008, when Khachatryan took over leadership of the State Revenue Committee, the government agency that assesses and collects taxes in Armenia. Following that post, he served two years as the country’s finance minister but continued to oversee taxation duties, earning him a reputation as a “superminister,” prosecutors said. To secure favorable tax treatment, the businessman, Sedrak Arustamyan, allegedly entered into two sham loan agreements with Khachatryan’s adult sons — the first loan in 2009 for $7 million and another in 2011 for $13.4 million. Both loans bore agreements specifying when payment was due and the terms of interest, but according to court filings, Arustamyan never received any interest or principal payment on either “supposed loan.” To make use of these purported loans, Khachatryan and his sons formed multiple entities “to receive, disguise and conceal illegal bribe payments” as well as their purchase of the Holmby Hills property. More than $13 million was wired by Arustamyan directly to West Coast Escrow’s Comerica Bank account, but days before the sale closed, he affirmed he would not hold title and relinquished any claim to the money, according to court filings. Soon after buying the home — previously owned by Lions Gate Entertainment executive Jon Feltheimer — the family razed the property and hired Richard Landry, a mega-mansion architect who has built trophy estates for celebrities including Mark Wahlberg, Tom Brady and Wayne Gretzky. Khachatryan’s sons told Landry’s design team that they wanted their children to attend school in L.A. and instructed the team to envision the home as their family’s residence, according to court filings. The inside of the mansion, designed by Richard Landry, was never completed.(Hilton & Hyland) Plans called for an elaborate compound, including rooms for Khachatryan, his two sons and his daughter, along with servants’ quarters, a wine cellar and a two-story library, according to court filings. Construction began in 2015, and although the home’s French-Normandy exterior was completed, along with gardens, a pool and spa, the interior is incomplete.In 2016, when Khachatryan left office, the alleged bribery scheme came to light and authorities discovered millions of dollars in unpaid taxes owed by Arsutamyan’s companies, according to prosecutors. In 2019, Khachatryan was charged with abuse of power and embezzlement. His sons and Arusatamyan were charged in 2020. The sons, Gurgen and Artyon, have since fled Armenia, according to court filings.