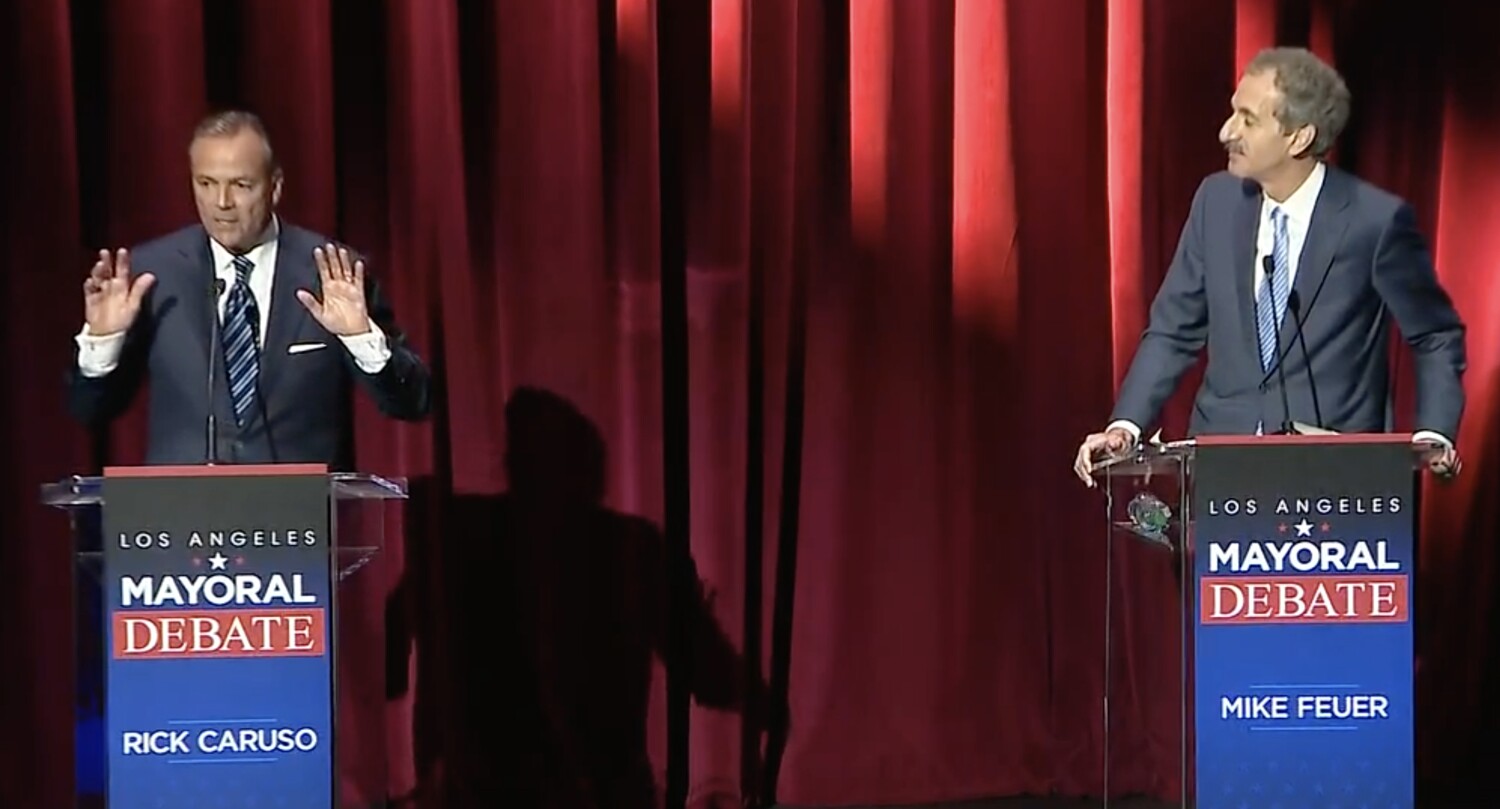 Have voters gotten their fill of billionaire businessmen keeping their personal finances secret while asking for the public’s trust in fiscal matters?

Property developer Rick Caruso is testing that question as a candidate for Los Angeles mayor. Seeking a job that would put him at the center of public finance in America’s second largest city, Caruso has flatly refused to release tax information that would allow voters to assess his integrity in financial matters.

The information that Caruso has released is worse than useless for making that determination. It’s so sketchy that it’s insulting — indeed, it suggests that Caruso thinks that L.A. voters are so uninterested in the issue, or so incapable to notice that he’s left out critical information, that they must be idiots.

“I will release everything I pay in taxes.”

That’s not a good look for a local politician claiming to be an agent of change.

At a March 22 candidates debateCaruso was challenged by an opponent, City Atty. Mike Feuer, to release his taxes for the last five years. Caruso did a neat little sidestep on that occasion, saying, “I will release everything I pay in taxes.”

The moment passed after about a minute and a quarter of jocular byplay, so fast that no one seemed to notice the enormous loophole Caruso had inserted into his pledge: He promised to disclose only what he has paid, not the size or source of the income that generated his tax bills.

It’s fair to assume that everybody involved in that debate — including the moderators and candidates Feuer, U.S. Rep. Karen Bass (D-Los Angeles) and City Council members Joe Buscaino and Kevin de León — assumed that Caruso had committed to releasing his tax returns. As my colleague James Rainey has reportedFeuer, Bass and Buscaino have already done so and De León has pledged to provide detailed information by Tuesday.

Caruso, however, has produced only a two-page letter setting forth how much he paid over the last five years in certain tax categories, along with a three-page statement from an accounting firm identifying the tax returns the firm examined. These documents are majestically uninformative.

There are sound reasons why candidates for high political offices need to disclose their tax returns.

It’s so voters can be “at least somewhat assured that what they do will be for the benefit of the public, and not to line their own pockets,” says Theodore P. Seto, a tax law expert at Loyola Law School in Los Angeles. “We want to have some assurance that we know what to watch for.”

That’s especially important when a candidate’s business interests are so deeply dependent on public policies — as Caruso’s real estate development interests, including The Grove on the Westside and the Americana at Brand in Glendale, two huge entertainment and retail malls — are dependent on municipal land use policies.

Another reason is that a candidates’ approach to their tax obligations provides a window into their general level of integrity, by showing how well they’ve adhered to rules on income reporting and deductions that are highly dependent on voluntary compliance.

The downside of nondisclosure became obvious during the Presidential administration of Donald Trump, during which suspicions were rife that his policies were aimed at lining his own pockets and those of his cronies, rather than enhancing the general welfare. Those suspicions were revived this month with the disclosure that the Saudi Arabian regime, toward which Trump showed great solicitude, has made a $2-billion investment in a fund operated by Trump’s son-in-law, Jared Kushner, who worked as a member of the White House staff.

That points us to the yawning gaps in Caruso’s disclosures.

Let’s examine his income taxes, to start. In his letter, he claimed to have paid $1.64 million in personal income taxes and $2.3 million in business income taxes over the past five years, or about $789,000 a year. Is that a lot or a little? It’s almost impossible to say, because he doesn’t disclose his taxable income for that period.

Think of it this way: If Caruso’s taxable income over those five years was $4.7 million, he would have paid about 35% of it in personal income taxes, or about the average of 25% in federal income tax paid by the richest taxpayers, plus about 10% paid in state income tax by the richest Californians. If Caruso’s income in that period came to $33 million, however, his tax burden would be only about 5%.

Caruso didn’t break down his income tax by year or by state versus federal taxes. Even elementary school math students know that a fraction is worthless if it doesn’t have both a numerator and denominator; Caruso didn’t give the numerator, so he must be hoping that voters have forgotten what they learned in arithmetic.

It is possible to conjecture about Caruso’s income over the past five years, based on what we know of or can estimate as his net worth. Forbes’ annual billionaires list placed it at $4.3 billion. If his holdings threw off annual returns at the same level as the stock market, or about 15% a year, it would produce annual income of about $645 million.

Caruso’s annual average of $789,000 in business and personal income taxes then would work out to about 0.12% of his income. I’d wager that few Los Angeles voters would regard that as his having paid his “fair share, plus,” as he characterized his tax bill in the debate. I’ve asked the Caruso campaign to comment or to provide their own figures, but haven’t heard back.

The other candidates chose not to insult voters’ intelligence this way. Feuer, Bass and Buscaino all released their actual tax returns, with some personal information blacked out. They show that for 2021, Feuer paid about 29% of his and his wife’s income in state and federal income tax, Bass paid about 20.67% and Buscaino and his wife paid about 26.5%.

Other aspects of Caruso’s tax disclosures scream out for analysis. One is the fact that so much of Caruso’s net worth plainly derives from the real estate business. As Seto observes, real estate is “probably the most tax-advantaged industry in the United States.”

That’s not Caruso’s doing, to be sure, but it’s an important source of his wealth and may well be a key reason that his tax bills might not match the rate paid by ordinary folk. Real estate assets benefit from depreciation rules — developers can reduce their taxes every year by an amount reflecting their commercial assets’ ostensible deterioration in value year by year.

Yet developers such as Caruso can record that loss against their other income, cutting their tax bills to zero or even to negative amounts.

In California, commercial property owners also get a tax advantage due to Proposition 13, which set the initial property tax on real estate at 1% of its assessed valuation and limits increases in valuation to a mere 2% a year, unless there is a change in ownership. Over time — say the 20 years that The Grove has been open, the real value of a property will soar beyond its assessed valuation and thus its owner’s tax liability.

How does any of that affect Caruso’s net worth and tax bill? We don’t know, because he refuses to say. But it would certainly be relevant to any land use policies a Mayor Rick Caruso might advocate or implement.

There are a few other curiosities in Caruso’s disclosure letter. He cites an average of $103.9 million a year in taxes “generated” in part by tenants of Caruso properties, including sales taxes, hotel occupancy taxes, and food and beverage taxes. Manifestly, however, those aren’t paid by Caruso but by his tenants and their customers, so it’s unclear what voters are supposed to make of them.

Caruso also cites the employer’s share of Social Security and Medicare taxes paid by the Caruso Companies, but economists almost uniformly treat those as taxes paid indirectly by employees, not employers, on the reasoning that money not paid by the employers would end up in the workers’ paychecks.

Put it all together, and the candidates for mayor, whatever their individual qualities or qualifications, fall into two categories: The ones who seek the voters’ trust by disclosing all they can about their personal finances, and Rick Caruso. He is the candidate with the arrogance to ask the voters to trust him while denying them the information they need to decide whether to do so.