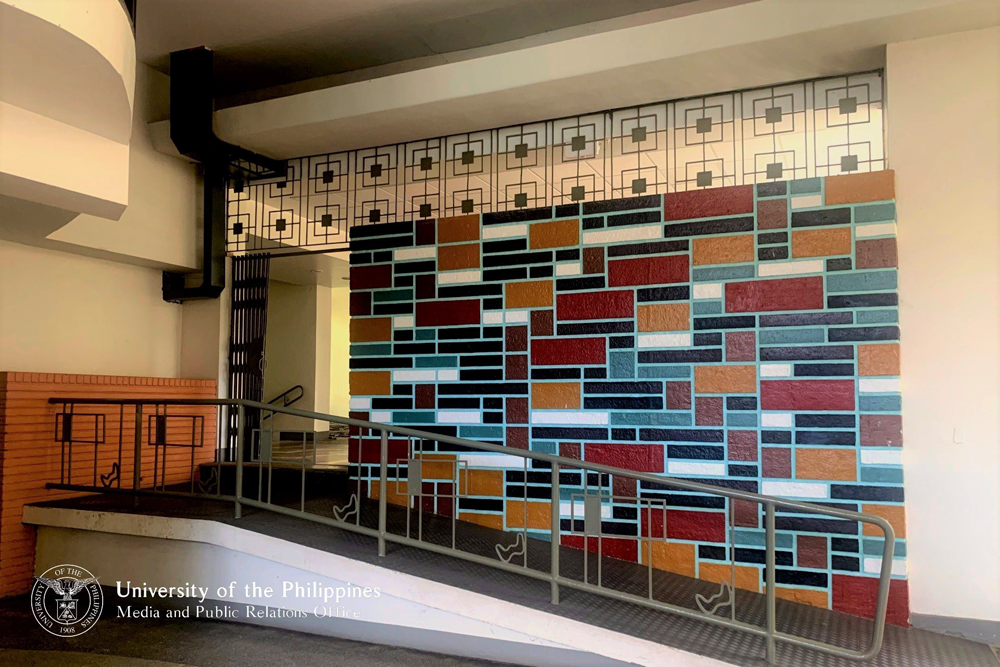 The Molave Residence Hall, a post-war, co-ed dormitory building in the University of the Philippines-Diliman Campus, recently won in the Repair and Restoration Category at the Philippine Excellence in Concrete Constructions Award (PECCA) conferred last June 9, 2022 at Philconstruct in Pampanga. Under PECCA, the winners were assessed based on engineering, creativity and functionality, and innovations through the use of concrete.  Built in 1949-50, the Molave Residence Hall is considered a historically important building in the UP-Diliman campus, not only because it was the first permanent student dormitory of the university, it was also designed by the famous Filipino architect Cesar Concio. The style of the original building is American-colonial, with some hints of Art Deco integrated into International Style, which was the primary style of the postwar period. Concio not only had the distinction of being the first University Architect who designed iconic campus buildings such as the double-parabola Church of the Risen Lord, Palma Hall, and the College of Engineering’s Melchor Hall. He also designed the Insular Life Building, a famous Ayala Avenue landmark; and Baclaran Church. An iconic building in UP Located on Magsaysay Avenue, across the UP Film Center and right before Ang Bahay ng Alumni, Molave Residence Hall is partially hidden from the road by its wide setback and shade trees. When it first opened its doors in 1951, the Men’s North Dormitory, which occupied one wing, was renamed the Kanlaon Residence Hall. Then-UP president Carlos P. Romulo would rename it to the Molave Residence Hall. It started accepting female residents during the increase in student population in 1969, and reverted back to an all-male dormitory until its temporary closure before the Covid-19 pandemic. We talked to Dr. Raquel B. Florendo, Vice Chancellor for Planning and Development at the University of the Philippines-Diliman, on the repair and restoration process of Molave Residence Hall, which was a tie-up between the UP System and the Department of Public Works and Highways (DPWH), with help from UP Diliman. The project also adhered to heritage laws subject to the National Commission for Culture and the Arts (NCCA), the National Historical Commission of the Philippines (NHCP), and the National Museum. The building, which is now more than 70 years old, needed immediate repairs and updating, most especially for modern-day accessibility. According to Florendo, wear and tear was apparent and many modifications were added through the decades due to increased student use and to accommodate the changing needs of dorm life. The original coffered ceiling was boarded up; canteen concessionaires added partitions, obscuring the midcentury terrazzo floor pattern, which is similar to the flooring of Concio’s Palma Hall. The transoms with decorative grilles were covered with plywood. “The ones handling the project were very conscious of this holistic view of addressing modern needs yet compliant to code requirements, and to the Batas Pambansa No. 344 or the accessibility act,” says Florendo. Restoration for present-day needs, gender-neutral bathrooms The renovation and restoration project of Molave started in April 2019, and was completed in June 2020, with a short break in between during the pandemic. The old plans of architect Concio were fastidiously researched, and it was through this that the coffered ceiling and other areas were restored. Partitions of the old canteen and boards covering the transoms were removed. In compliance with the accessibility act, new concrete ramps were built instead of the usual steel ramps to match the building’s original finishes and materials, and to go with its architectural style. All the doors and washroom facilities have also been updated to accessibility standards, with gender-neutral bathrooms. Florendo says the Office of the Vice Chancellor for Planning and Development handled the interiors including the aesthetics, equipment outlay, bedrooms, furnishings, and color. While new furniture was purchased for the dormitory, the original midcentury furnishings were set aside to be inventoried, conserved, and restored.  Renovations on the dormitory were completed in time to accommodate Silungang Molave (SiM), a 39-bed isolation unit for UP Diliman constituents and its nearby barangays. Requested by the UP Health Service who were looking for an isolation ward for the growing number of COVID-19 patients in the community, Molave Residence Hall fit the bill because it was large, well-ventilated, and newly renovated. The ward was maintained until the early part of 2022.   While UP Diliman is on blended learning, the dormitory is currently waiting for the directive of UP administration for eventual face-to-face classes in the immediate future. This time, Molave Residence Hall will reopen for a new generation of pandemic and post-pandemic students, much like how it was for students after a restorative and hopeful post-war era 70 years ago. — LA, GMA News