At Selfridges’ store at Oxford Street in central Londonthe robot will be printing items made of plastic taken from the world’s seas.

It’s creating a variety of designer objects from the plastic, including vases, chairs, stools and lampshades, which can be selected and bought by customers.

The items have been designed by Nagami, a Spanish firm specialising in high-end furniture and homeware.

The Selfridges’ robot is 3D-printing the items through the rest of April, which cost anything from £155 to £830. 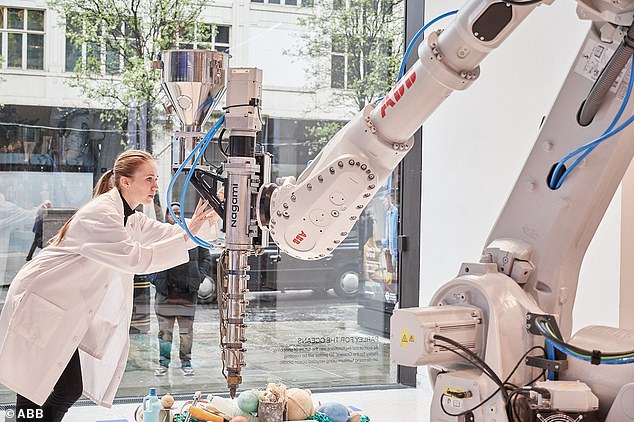 For the month of April, an ABB industrial robot will form part of a 3D printing display featured in one of Selfridges’ famous shop windows at its store in Oxford Street, London

WHAT IS UPCYCLED PLASTIC?

The dictionary definition of upcycling is ‘reuse discarded objects or materials in such a way as to create a product of higher quality or value than the original’.

Plastic upcycling is the process of recreating new items and products from waste plastic materials that would usually end up as pollution in the environment.

It is a good way to reduce waste and convert waste into something more valuable and longer-lived.

3D-printing uses software to create a three dimensional design before being printed by robotic equipment.

Automated robotic arms have a nozzle at the end that emits the printing substance – in this case melted-down plastic waste – layer by layer.

The robot is the creation of ABB, a European automation company that normally supplies robots for industrial purposes.

‘While expanded choice is great for consumers, it also comes at a cost to the environment, with products and packaging often being discarded with little thought about where they end up or whether they get recycled,’ said Marc Segura, president of ABB’s robotics division.

‘By re-using plastic from the world’s oceans to print designer objects, we help to highlight the important contribution of robots in creating the sustainable manufacturing processes central to a circular economy.’

People going along Oxford Street will be able to see the robot in action through the shop window, in the corner of the store just off Duke Street.

When they step into the store, they can select items to purchase on a screen, much like the interactive kiosks at McDonald’s.

Purchases are made to order on the premises while they wait.

In terms of time, it can vary from around two hours for a simple vase or lamp through to several hours for the larger, more complex products like chairs. 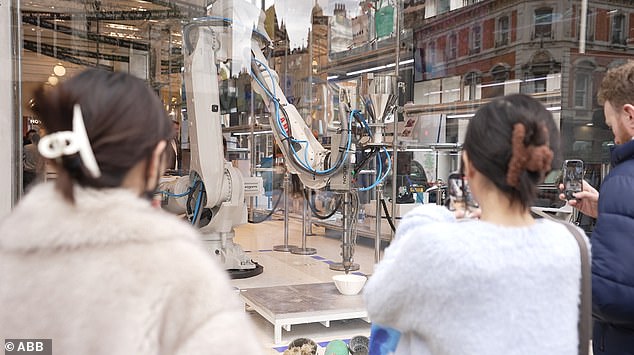 People going along Oxford Street will be able to see the robot in action through the shop window, in the corner of the store just off Duke Street

Selfridges’ robot uses ‘upcycled’ plastic from the world’s seas collected by environmental organisation Parley for the Oceans, which already counts Adidas, American Express, the United Nations and the World Bank as major partners.

‘Working with two industry leaders, ABB and Nagami, we can now print on demand anywhere in the world to turn a problem into a solution,’ said Parley founder and CEO Cyrill Gutsch.

‘Beyond the huge potential for reducing waste by printing directly inside retail locations like Selfridges, we want to use this technology to empower local communities across the globe.’

Such a machine could be supplied to developing countries to transform local plastic pollution into useful objects.

It’s hoped the demonstration will also help to highlight the wider potential of robotic automation in helping retailers attract customers into their stores. 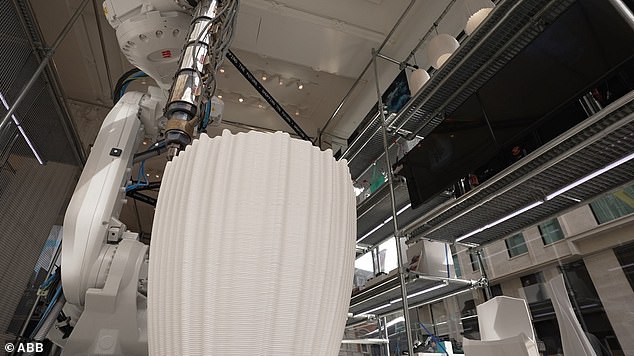 3D-printing uses software to create a three dimensional design before being printed by robotic equipment. Automated robotic arms have a nozzle at the end that emit the printing substance layer by layer

Research organisation Coherent Market Insights has estimated a 30 per cent growth in the uptake of robots in retail by 2028.

ABB already has a robotic demo at German fashion retailer Solebox’s store in Berlin, which picks shoes selected by customers using a screen.

If the shoe doesn’t fit or the customer would like to try something else, the robot picks it up from the drawer and returns it to the shelf. 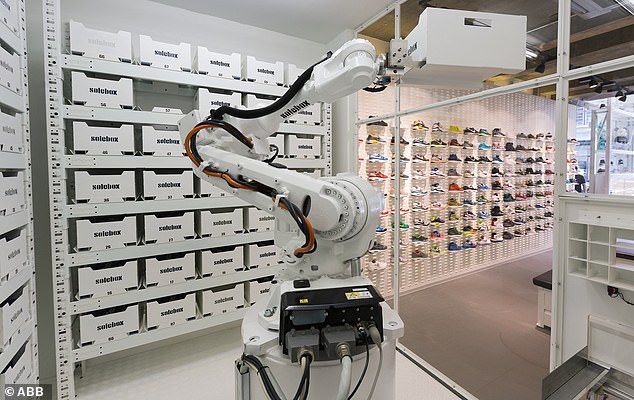 In China, a retail kiosk developed by Chinese mobile communications company, Huawei in conjunction with ABB, allows customers to collect a range of devices including smartphones and tablets.

Designed to be situated in high street locations, the kiosk uses a robot called FlexBuffer to select devices either ordered online or purchased onsite.

Once selected, the products are placed into a collection drawer for the customer to take away.

First invented in the 1980s by Chuck Hull, an engineer and physicist, 3D printing technology – also called additive manufacturing – is the process of making an object by depositing material, one layer at a time.

Similarly to how an inkjet printer adds individual dots of ink to form an image, a 3D printer adds material where it is needed, based on a digital file.

Many conventional manufacturing processes involved cutting away excess materials to make a part, and this can lead to wastage of up to 30 pounds (13.6 kilograms) for every one pound of useful material, according to the Energy Department’s Oak Ridge National Laboratory in Tennessee.

By contrast, with some 3D printing processes about 98 per cent of the raw material is used in the finished part, and the method can be used to make small components using plastics and metal powders, with some experimenting with chocolate and other food, as well as biomaterials similar to human cells.

3D printers have been used to manufacture everything from prosthetic limbs to robots, and the process follows these basic steps:

· Preparing the printer, including refilling the raw materials such as plastics, metal powders and binding solutions.

· Initiating the printing process via the machine, which builds the object.

· 3D printing processes can vary, but material extrusion is the most common, and it works like a glue gun: the printing material is heated until it liquefies and is extruded through the print nozzle

· Using information from the digital file, the design is split into two-dimensional cross-sections so the printers knows where to put the material

· The polymer rapidly solidifies, bonding to the layer below before the build platform lowers and the print head adds another layer (depending on the object, the entire process can take anywhere from minutes to days.)

· After the printing is finished, every object requires some post-processing, ranging from unsticking the object from the build platform to removing support, to removing excess powders.