Angels fall in blowout to Phillies for ninth consecutive loss 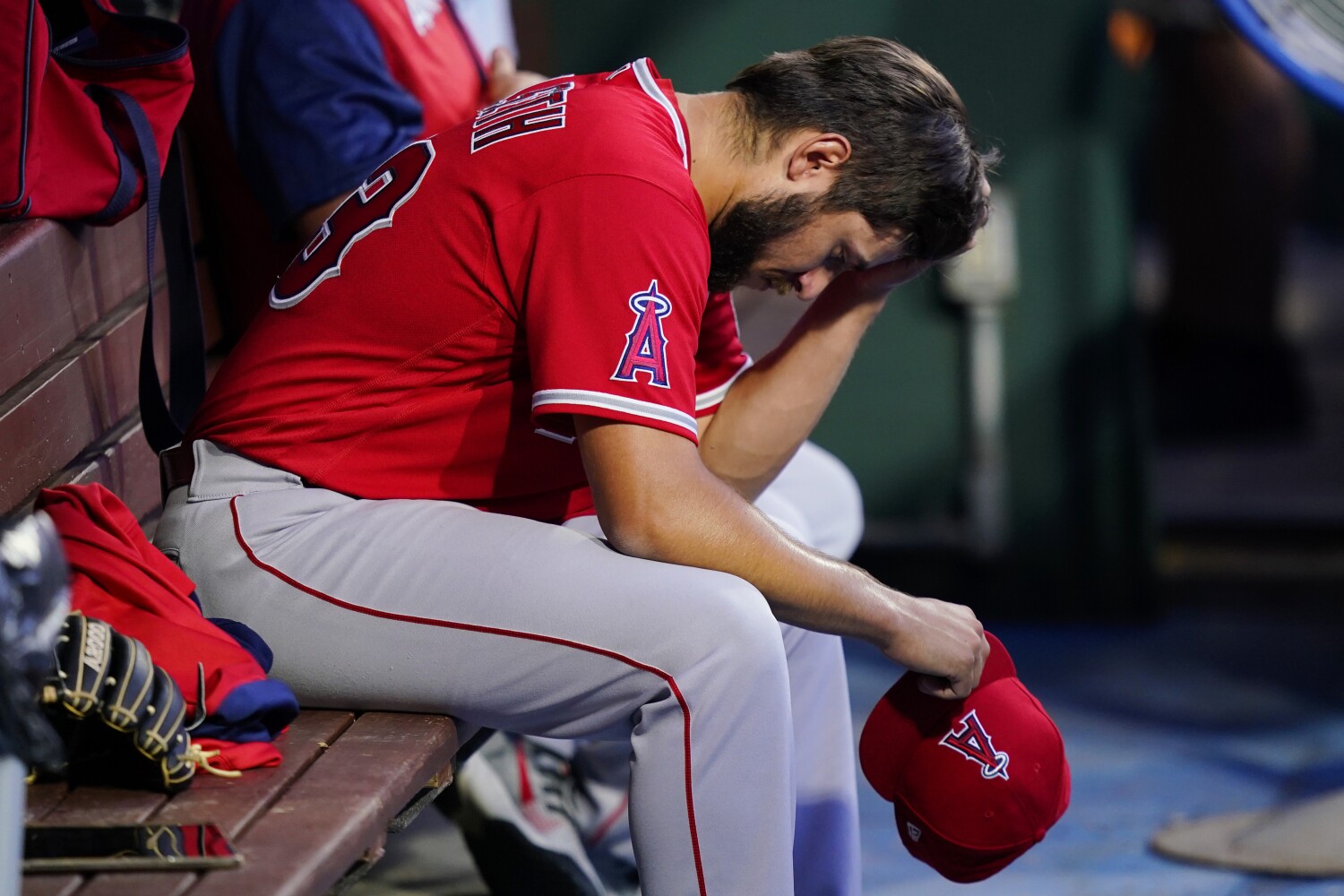 PHILADELPHIA — What Angels manager Joe Maddon called a “big bump in the road” Friday afternoon felt more like Heartbreak Hill on Friday night.The Angels were blown out in a 10-0 loss to the Philadelphia Phillies at Citizens Bank Park, continuing a 2 ½-week freefall that is threatening to wipe out all of the good vibes and momentum they built during an impressive six-week start.The Angels have lost nine straight — their first such streak since Aug. 4-15, 2016 — and 13 of 16 games, falling from 24-13 and a first-place tie in the American League West on May 15 to 27-26 and 7 ½ games behind Houston.Their starting pitching has been spotty, their relief work erratic and their offense virtually nonexistent on a four-game trip in which the Angels have been outscored 27-3 by the New York Yankees and Phillies.“It looks terrible, and when you’re not hitting, it looks like you’re lifeless,” Maddon said. “But when you’re not hitting, a lot of things look wrong. We’ll stay with the guys. We’re going to come back. It’s going to be fine. But in the meantime, it’s difficult to watch.”The two hitters the Angels lean most heavily on — Mike Trout and Shohei Ohtani — have been silent during the losing streak.Trout, the Millville, N.J., native who is playing his first series in Philadelphia since 2014, went hitless in four at-bats Friday and is batting .114 (four for 35) with a .413 on-base-plus-slugging percentage, one homer, two RBIs, 13 strikeouts and one walk in his last nine games. Shohei Ohtani walks to the on-deck circle during the fifth inning Friday.(Matt Slocum / Associated Press) Ohtani went hitless in three at-bats Friday and is batting .133 (four for 30) with a .700 OPS, two homers, four RBIs, 13 strikeouts and six walks in his last 10 games.Trout received a warm reception before his first at-bat from a sizable contingent of fans who made the 45-mile drive up from Millville, but he was unable to give them anything to cheer about during the game.He struck out in the first inning, flied to left field in the third and was robbed of hits in the sixth, when second baseman Nick Maton made a diving catch of his popup to shallow right field, and eighth, when Odubel Herrera made a diving catch of his fly ball to left field.“I think he might be trying to put the whole team on his back a little too much,” Maddon said of Trout. “I want him to just be Mike Trout, go play. He’s trying a bit too hard. That’s how I see it.“He’s one of the leaders of the team. He wants it to be right. He wants to get us there. He’s a very accountable human being. He’s all of these different things, and I think he might be trying to carry the team.”The underachieving Phillies, off to an uninspiring 22-29 start, fired manager Joe Girardi earlier Friday and replaced him with bench coach Rob Thomson.“It’s tough, man,” Maddon said of Girardi. “It’s early in the season, quite frankly, and I’m telling you, things change. As quickly as they change one way, they can change back to the other.”It took one pitch for the Phillies to enact change Friday night, Kyle Schwarber crushing Angels right-hander Chase Silseth’s first pitch of the game, a 95-mph fastball, into the trees beyond the center-field wall for a 432-foot homer.Bryson Stott hit a three-run homer to right field for a 4-0 Phillies lead in the second. Jamie Barria replaced Silseth in the second and gave up a three-run homer to Bryce Harper in the fifth for a 7-0 lead.Maton hit an RBI triple in the fifth, a sinking liner that bounced past a diving Taylor Ward in right field, for an 8-0 lead. Ward was pulled in the sixth because of right hamstring tightness.“I felt something in my hamstring early and decided to tell them,” Ward said. “I’m not sure [when I’ll be able to play again]. I’m going to take it day by day.”Schwarber and Harper added solo homers in the sixth for a 10-0 lead. The Angels had only five hits off right-hander Zach Elfin, who threw eight scoreless innings.Maddon held a pregame meeting with the team’s hitters in which he addressed the qualify of at-bats and the importance of showing fight at the plate. The results weren’t there Friday night, but Maddon says he thinks the effort was.“When you’re not hitting, it looks like you’re not doing anything right, I understand that,” Maddon said. “But I learned this a long time ago — you never question an athlete’s heart unless you’re absolutely positive. And I would say that our performance isn’t good. But I don’t question the heart.”