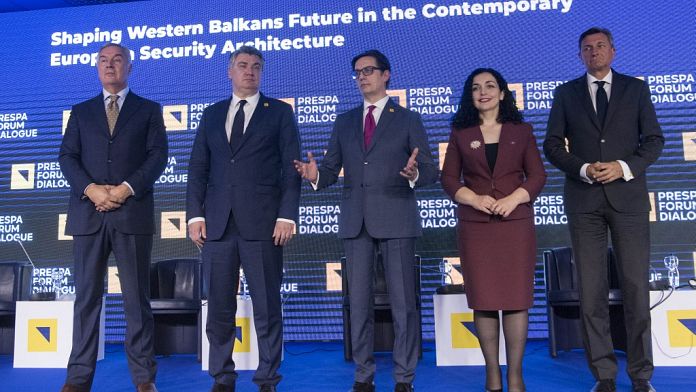 A forum has urged the European Union (EU) to speed up the integration of the Western Balkans into the bloc, following Brussel’s decision to support Ukraine’s candidacy on Thursday. The Prespa Forum, which was attended by heads of state, governments and diplomats from the Western Balkans and EU, took place on Friday in Ohrid, North Macedonia.One of the main topics on the agenda was how to improve the EU’s ties with both Western Balkans countries and Ukraine. Many speakers at the event claimed that, while giving Ukraine candidacy status was “a significant signal”, it must be accompanied by concrete results in the EU’s enlargement process in Western Balkans.“All countries that are seeking enlargement are on one page,” said Manuel Sarrazin, Germany’s special envoy to the Western Balkans. “The credibility of the enlargement towards Ukraine, towards Moldova, towards Western Balkans is the same.”He also claimed that the integration processes of the Western Balkans and Ukraine were deeply intertwined. “If the Ukrainians see that even with regards to a small country like Montenegro, the EU is not willing to move forward … what does it mean for a big country like Ukraine?”If Western Balkans countries see that a country fighting like Ukraine has no special situation regarding enlargement, whoever shall have a prospect for European Enlargement then,” he added.Current EU candidate countries in the western Balkans include North Macedonia, Montenegro, Albania and Serbia. Bosnia and Herzegovina and Kosovo are also potential candidates.Brussels is yet to set a clear deadline on when, or if, these countries can join the bloc, although it has said the EU is committed to enlargement in the region. Most states in the Western Balkans opened EU accession talks in the mid to late 2000s, with North Macedonia applying for membership in 2004, Albania in 2009, Montenegro in 2008, Serbia in 2009 and Bosnia in 2016. Speaking at Friday’s forum, Serbian prime minister Ana Brnabic said the Western Balkans needs to be integrated into the EU to improve its overall progress, alongside neighbourly relations in the fractious region. Her remarks were followed by an address from the Ukrainian President Volodymyr Zelenskyy.He called for a strong and consolidated EU, saying “there is not a single country left in Europe that has not suffered from at least one of the manifestations of Russian anti-European policy.”The European Commission formally backed Ukraine and Moldova to become EU candidates Thursday, although EU leaders will have the final say at a summit on 23-24 June. “I think it is a good initiative,” said Borut Pahor, president of Slovenia in reference to Ukraine’s EU membership bid. “I support it [along with] nine other EU presidents.”But I have also just sent an official letter, to the Council President Charles Michel that Bosnia and Herzegovina should get the same,” he added.Bosnia has been considered a potential candidate for EU Membership since 2003. But, according to a European Parliament briefing note, “internal political instability and lack of political reforms have dampened the country’s prospects of joining the EU.”In a press release from the president’s office, Pahor claimed awarding Bosnia candidate status would bolster pro-EU forces in the country and accelerate the country’s adherence to European values, countering a trend of Euro-scepticism.