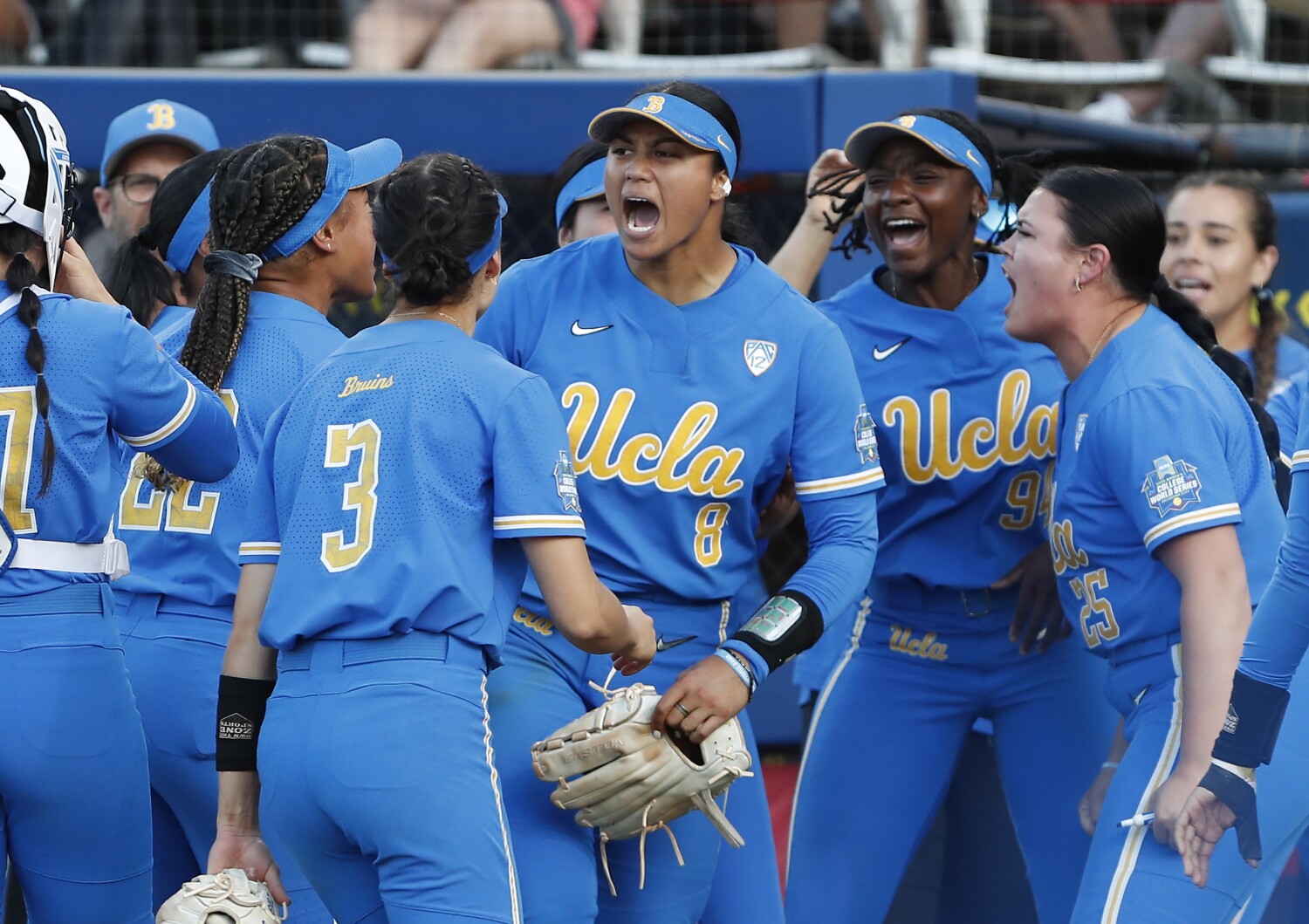 OKLAHOMA CITY — Megan Faraimo retreated to UCLA’s team hotel after giving up four runs in fewer than three innings Thursday against Texas and faced a choice.Finally playing on the stage she long dreamed about, she could crumble or she could come back.The redshirt junior chose the latter, leading the Bruins to a season-saving 6-1 win over No. 9 seed Northwestern on Friday in the Women’s College World Series.Faraimo did it all. She struck out 10 and scattered five hits while outdueling Big Ten pitcher of the year Danielle Williams. She launched a solo home run to lead off the sixth inning, and she fielded the final out for good measure. After she sealed UCLA’s spot in another elimination game by shoveling the ball to first baseman Kinsley Washington, Faraimo punctuated the all-around effort with her signature celebration: a fierce fist pump and foot stomp.“She’s clutch at the end of the day,” UCLA coach Kelly Inouye-Perez said.The Bruins (49-9) get a day off before playing another elimination game Sunday at noon PDT on Ch. 7 against the loser of Saturday’s winners bracket game between No. 14 Florida and No. 7 Oklahoma State.No. 5 UCLA fell into the losers bracket in part because Faraimo’s underwhelming opening performance Thursday against Texas when she lasted just 2 1/3 innings in a 7-2 loss, giving up six hits and four runs. It was Faraimo’s first start at the World Series. Defiant and motivated, the Bruins vowed that they would fight back, led by their ace.“When Megan’s back is against the wall, that’s when the fiercest competitor comes out,” said catcher Delanie Wisz, whose RBI single opened the scoring in the first inning. “She’s just a straight dog.” Bruins shortstop Briana Perez tags out the Wildcats’ Skyler Shellmyer at second base during the first inning.(Alonzo Adams / Associated Press) Faraimo gave up her first run of the night on a two-out RBI double from Northwestern’s No. 9 hitter, Grace Nieto, in the fifth inning. Faraimo walked the next batter and loaded the bases with Big Ten player of the year Rachel Lewis at the plate. Lewis got ahead with a 3-and-0 count.“I just told myself to throw strikes,” said Faraimo, who already suffered a meltdown against Northwestern this year when she gave up four runs in the bottom of the eighth in a 6-4 loss in February. “Because I felt like no matter what, whether she gets a hit, whether I get her, my team was going to have my back either way.”The pitcher did it herself, firing three consecutive strikes to retire Northwestern’s all-time home run leader, celebrating her most important strikeout of the night with a ferocious fist pump and yell.She pumped her fist again after launching her second home run of the year, which led off the sixth inning and swung momentum toward the Bruins, who scored three more runs in the seventh. UCLA’s Megan Faraimo celebrates her sixth-inning, solo home run against Northwestern. It was her second homer of the season.(Alonzo Adams / Associated Press) While the two-way pitcher entered with only 60 at-bats on the season, Faraimo flashed her clutch hitting with a game-winning hit against Duke in the super regional. The former Gatorade national player of the year hit .316 as a senior at San Diego’s Cathedral Catholic High with seven home runs and 22 RBIs.Why was such a strong bat hiding on the bench most of the season?“Bad coaching,” Inouye-Perez joked.Truthfully, Faraimo wanted to make pitching her priority. But when the Bruins suffered injuries to key hitters like Aaliyah Jordan, Washington, Alyssa Garcia and Savannah Pola throughout the season, they turned to their pitcher. Hitting is still a challenge, Faraimo said, but she just tries to get quality at-bats. She doesn’t care what they look like.On Friday, the ball looked perfect flying into the left-field stands.