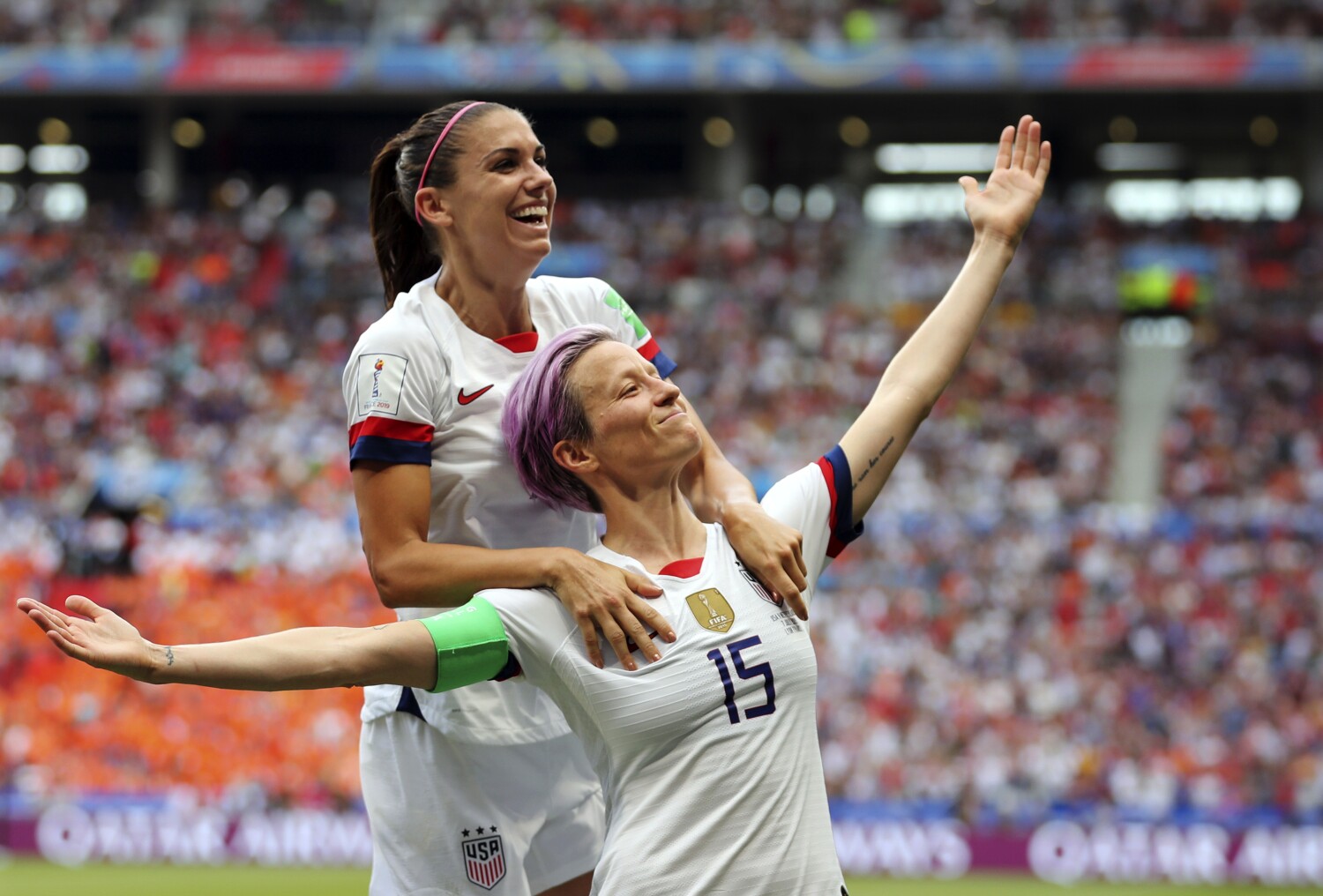 U.S. coach Vlatko Andonovski called up 23 women Monday for next month’s CONCACAF W Championship, the qualifier for the 2023 World Cup and 2024 Olympics. And it is a roster full of surprises — both for who made it and for who didn’t.Making it were forward Megan Rapinoe and defender Becky Sauerbrunn.Rapinoe’s inclusion was surprising because the 36-year-old hasn’t started for her NWSL club this season, playing just 154 minutes over four games for the OL Reign. And she hasn’t been part of the national team since October.Less surprising was the inclusion of Sauerbrunn, who is a week past her 37th birthday. Although she missed the national team’s April camp with a knee injury, Sauerbrunn has played in the Portland Thorns’ last six NWSL games. She is also the U.S. captain and leads all active players with 202 international caps.Also returning for the first time since October is Alex Morgan, the NWSL scoring leader, with nine goals in as many games for the expansion San Diego Wave. She is the national team’s leading active scorer, with 115 goals, and she’ll be joined by Wave midfielder Taylor Kornieck, who played seven times for age-group national teams but is joining the senior national team for the first time.Among the missing is Angel City forward Christen Press, who hasn’t played with the national team since last summer’s Tokyo Olympics. She left Angel City’s match in Louisville on Saturday with a knee injury.“Since we were last together in April, we’ve been evaluating a lot of games and hours of video and have had extensive conversations among the coaching staff to arrive at this roster,” Andonovski said in a statement. “As usual, the players don’t make these decisions easy. But we feel this is a roster that can accomplish all of our goals over the four weeks we will be together for what we hope will be seven successful games.” Samantha Mewis, center, celebrates with Christen Press, right, and Rose Lavelle after scoring a goal against Portugal during an international friendly match in June 2021.(Associated Press) Just 10 of the 23 players on the roster have experience in World Cup and Olympic qualifying, but the team also has five players with 100 or more caps in Sauerbrunn, Morgan, Rapinoe, Kelley O’Hara and midfielder Lindsey Horan. Eight players have fewer than 10 international appearances.The U.S. will play friendlies against Colombia on June 25 in suburban Denver and on June 28 outside Salt Lake City before flying to Monterrey, Mexico, for the eight-team CONCACAF tournament, which kicks off July 4. The U.S. will play Haiti, Jamaica and Mexico in group competition. Costa Rica, Panama, Trinidad and Tobago and Canada, the reigning Olympic champion, will play in the other group.The top two teams in each group will earn berths in next summer’s expanded World Cup field, as well as spots in the tournament semifinals. The W Championship winner earns an automatic berth in the 2024 Paris Olympics while the second- and third-place finishers will meet in a September playoff where another Olympic invitation will be at stake. Newsletter All about the beautiful game Go inside the L.A. pro soccer scene and beyond in Kevin Baxter’s weekly newsletter. Enter email address Sign Me Up You may occasionally receive promotional content from the Los Angeles Times. Morgan, Rapinoe and Sauerbrunn, three of the seven players on the roster older than 30, were on the U.S. team that last played in a World Cup qualifying tournament in Mexico. The Americans suffered their only loss against Mexico in that 2010 tournament, forcing them to win a two-leg playoff with Italy to qualify for the 2011 World Cup.Horan, who plays in France for Lyon, is the only player on the roster from outside the NWSL.The roster
Goalkeeper: Aubrey Kingsbury (Washington Spirit), Casey Murphy (North Carolina Courage), Alyssa Naeher (Chicago Red Stars)Defenders: Alana Cook (OL Reign), Emily Fox (Racing Louisville FC), Naomi Girma (San Diego Wave FC), Sofia Huerta (OL Reign), Kelley O’Hara (Washington Spirit), Becky Sauerbrunn (Portland Thorns FC), Emily Sonnett (Washington Spirit)Midfielders: Lindsey Horan (Olympique Lyon), Taylor Kornieck (San Diego Wave FC), Rose Lavelle (OL Reign), Kristie Mewis (NJ/NY Gotham FC), Ashley Sanchez (Washington Spirit), Andi Sullivan (Washington Spirit)Forwards: Ashley Hatch (Washington Spirit), Alex Morgan (San Diego Wave FC), Midge Purce (NJ/NY Gotham FC), Mallory Pugh (Chicago Red Stars), Megan Rapinoe (OL Reign), Trinity Rodman (Washington Spirit), Sophia Smith (Portland Thorns FC)Additional players for June friendlies vs. ColombiaDefenders: Carson Pickett (North Carolina Courage)Midfielders: Jaelin Howell (Racing Louisville), Sam Coffey (Portland Thorns FC)