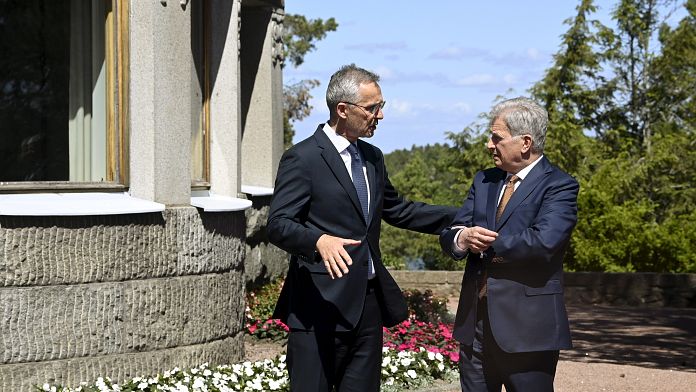 NATO Secretary-General Jens Stoltenberg met with Finnish President Sauli Niinistö in Helsinki on Sunday to discuss its bid to join the military alliance.Finland and Sweden moved quickly to submit applications to join NATO, citing security concerns after Russia’s invasion of Ukraine.  They want to benefit from NATO’s Article 5 guarantee, which means if one country is attacked, the rest of the alliance comes to its aid. But Turkey, a NATO member, insists it can’t agree to Finland and Sweden joining, alleging they harbour Kurdish political figures.”Finland and Sweden’s membership in NATO would further strengthen the Nordic region of our alliance,” said Stoltenberg. “And now allies are considering the next steps on their path to NATO. We have to address the security concerns of all allies, including Turkish concerns about the terrorist group PKK.”NATO’s existing 30 members are set to discuss Finland and Sweden’s applications this month. Turkish President Recep Tayyip Erdogan said both nations joining NATO would carry security risks for his country.  The group known as PKK has waged a 38-year insurgency against Turkey that has led to tens of thousands of deaths. It is designated a terrorist entity by the United States and the European Union, including Sweden and Finland.However, the West’s attitude to the PKK’s Syrian wing, the People’s Protection Units, or YPG, has caused acrimony between Ankara and other NATO members. The YPG forms the backbone of the forces involved in the US-led fight against the Islamic State group.Niinistö said he had been surprised by Turkey’s position regarding his country joining NATO.”It is all the reason is to take seriously what your counterpart is saying. And that’s what we are going to do, take seriously what Turkey puts forward,” he said. “Let’s hope that at the end we find such a solution which satisfies everybody.”