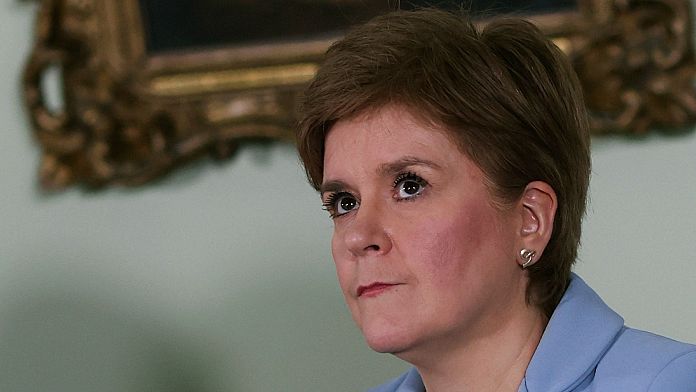 Scotland’s First Minister Nicola Sturgeon has unveiled her new plan to hold a referendum on independence, comparing Scotland with other European countries and laying out her case that Scotland would be fairer, wealthier and happier apart from the UK. “After everything that has happened, Brexit, COVID, Boris Johnson, it is time to set out a different and better vision,” Sturgeon told journalists at Bute House, her official residence in Edinburgh. “Do we stay tied to a UK economic model that consigns us to relatively poor economic and social outcomes that are likely to get worse not better outside the European Union? Or do we instead lift our eyes with hope and optimism and take inspiration from comparable countries across Europe?” the first minister asked. In a social media campaign that rolled out after the speech, Norway, Finland, Denmark and Ireland are among the countries cited as examples of European nations that had weathered similar issues as Scotland during the COVID pandemic, but emerged with a more positive economic outlook.  Path to legal referendum not yet clearNicola Sturgeon stressed that a new independence referendum, which she has promised to deliver before the end of 2023, would have to be lawful and says if Boris Johnson’s government refuses to grant a Section 30 order — which gives the Scottish government temporary powers to hold a referendum — then she would set out her own path to the referendum based on legal advice “if that is what is required” although did not give any concrete details of what that might look like. The first minister used the opportunity to criticise Boris Johnson’s “democracy-denying UK government” for not granting the Section 30 order, referencing Monday’s proposal by his government to unilaterally alter parts of the Northern Ireland Protocol in the Brexit agreement. Sturgeon said she was willing to sit down with Johnson to negotiate a Section 30 order and that although they disagreed on the substance of independence, she hoped as democrats to be able to agree on the process of how the Scottish people should decide their future. The Scottish government will now publish a series of white papers with more detail on how it will approach specific issues around independence including what might happen if Scotland were to join the European Union, and how the flow of people, goods and services would work in practice across the border between Scotland and England after independence.Sturgeon acknowledged there would be implications for cross-border trade, customs and regulatory issues but carefully avoided using the words “hard border” or “checks”, an anathema to Unionists.”The benefits of Scotland being independent outweigh the challenges,” Nicola Sturgeon insisted. Political foes criticise Sturgeon’s new independence pushIn the Scottish Parliament on Tuesday, opposition leader Douglas Ross criticised the new move towards independence, saying it would be a waste of the Scottish government’s time and resources. “We can focus on rebuilding Scotland, or, as the SNP want, on dividing Scotland. Pushing for another divisive referendum, perhaps even an illegal wildcat referendum … is the wrong priority at the worst possible time,” the Scottish Conservatives leader said. Anas Sarwar, the leader of the Scottish Labour Party, called Sturgeon’s announcement “the same old speech.””How many times have we heard this before? It’s her taking us back to the politics of the past focusing on division and strife and trying to pit Scot versus Scot,” Sarwar said in a video. The last Scottish independence referendum was held in 2014 with 55% of voters saying they wanted to remain part of the United Kingdom.