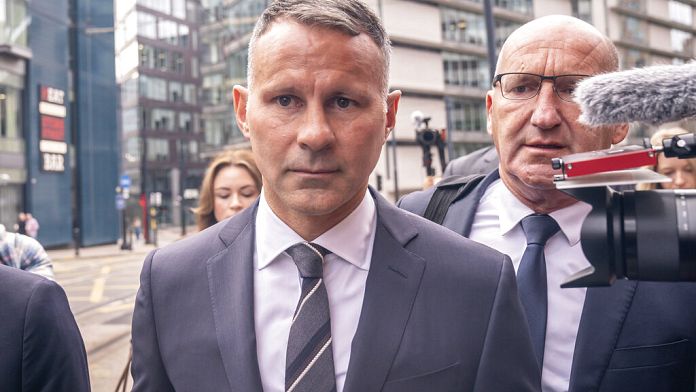 Prosecutor Peter Wright told the jury at Manchester’s Minshull Street Crown Court that while Giggs’ football skills were a wonderful thing, his life off the pitch was very different.

“In the privacy of his personal life at home or behind closed doors, there was, let’s say the facts reveal, a much uglier and more sinister side to his character,” Wright told the jury. “This was a private life that involved a litany of abuse, both physical and psychological, of a woman she claimed to love.”

48-year-old Giggs is accused of assaulting Kate Greville, 36, and causing actual physical harm at her home in Worsley, Greater Manchester, in November 2020. He is also accused of joint assault on Greville’s younger sister during the same incident. , as in addition to using control and coercion behaviors towards his ex girlfriend between August 2017 and November 2020.

The court heard how Giggs “completely lost self-control and deliberately headbutted Kate, causing her to have swollen lips and bruises.”

Giggs denied all allegations. He stepped down as manager of the Wales national team in June, saying he didn’t want to jeopardize preparations for the year-end World Cup in Qatar. He had been on leave since November.

The 48-year-old is the most decorated player in English football history, having helped United win thirteen Premier League titles and two Champions League trophies before hanging up his boots in 2014.

He officially resigned as the head of Wales in June. His replacement, Robert Page, led Wales to the first World Cup in sixty-four years and will take the lead in Qatar later this year.

The trial, which had been delayed due to a backlog of court cases caused by the COVID-19 pandemic, is expected to last up to ten days.