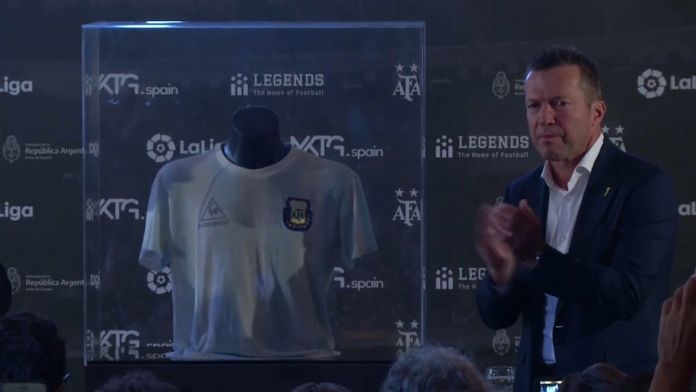 Argentine fans rejoiced that one of national hero Diego Maradona’s iconic jerseys was “returned” on Thursday.

During a ceremony at the Argentine embassy in Madrid, former German captain Lothar Matthäus unveiled the symbolic number 10 jersey worn by Maradona during the 1986 World Cup final.

The footballer admitted that separating from the shirt was a difficult decision for him.

“It was difficult for me to return this shirt because it is a great souvenir,” he said. “But in the end, I knew that this extraordinary relic of world football history … belonged to Madrid.”

Matthew swapped the jersey with Maradona at half-time during the World Cup final and has kept it ever since. The final was intense and hard fought, with Argentia winning 3-2.

The requests for “repatriation” of the shirt have become stronger and more insistent in the last 36 years.

The shirt will be exhibited at the ‘Legends’ football museum in the Spanish capital Madrid.

It wasn’t the only jersey Matthew swapped with the Argentine legend. In the 1990 World Cup final, both players handed over their jerseys after Germany beat Argentina 1-0.

That shirt has remained in a museum in Germany.

At the beginning of May, another shirt worn by Maradonna during the England-Argentina quarter-finals in Mexico ’86, which went down in history for the ‘hand of god’ goal, fetched over 9 million EUR.

This final price made the jersey the most expensive sports jersey in history.