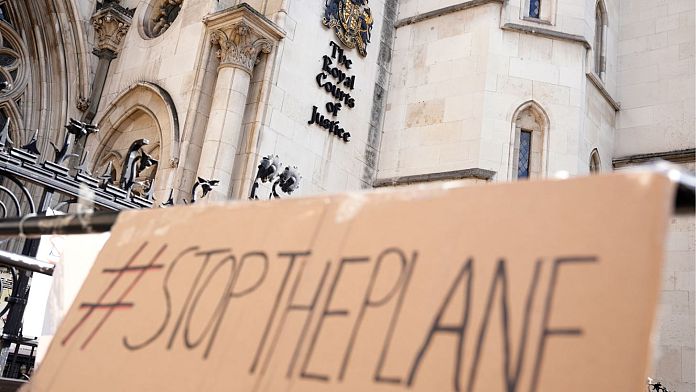 Lawyers have launched a last-minute legal challenge to the UK government’s policy to deport asylum seekers to Rwanda.The plan to send undocumented migrants abroad undermines the “basic dignity” of people who are escaping war and oppression, a lawyer argued on Monday.The hearing is one of two at the Court of Appeal in London, aimed at blocking the implementation of the controversial policy.A coalition of groups — including immigration rights advocates and public employee unions — had filed a legal complaint ahead of the first deportation flight, which is set to take off on Tuesday.Activists are separately challenging the deportations on a person-by-person basis, seeking to ensure that no migrants will be eligible for deportation even if the flights are allowed to go ahead.The programme aims to discourage migrants from risking their lives to reach the UK by crossing the English Channel in small boats.But human rights groups say the policy is illegal, inhumane and will only magnify the risks for asylum seekers.Britain paid Rwanda £120 million (€140 million) up front and will make additional payments based on the number of people deported.But Raza Husain, a lawyer for some of the complainants, said there were serious concerns about the protection of migrant rights in Rwanda.”[The policy] amounts to a serious interference with basic dignity … where those individuals have already suffered significant trauma and have mental health issues,” he said in the court filings on Monday.