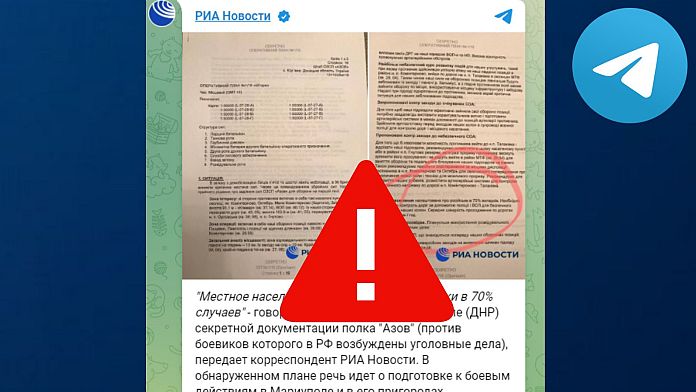 A classified document supposedly written by the Azov battalion has been shared all over Russian state media, alleging that the majority of the population in Mariupol is on Moscow’s side. Euronews fact-checked these claims.The top-secret file was initially shared on the Telegram channel of Ria Novosti, a pro-Kremlin media. It states that over 70% of the population in Mariupol is loyal to Russia. The Azov battalion is a volunteer ultranationalist militia formed in 2014 to fight pro-Russian forces in the Donbas. During the siege of Mariupol, which was very heavily bombarded this spring, Azov fighters retreated to a steel plant that remained the last contested territory, until the city fell to Russia in May.RIA Novosti said that these documents were found in Mariupol, however the document never mentions the city and does not mention that Mariupol’s population is the one that supports Russia.Many inconsistencies and mistakesThe file however does mention certain villages 40-50 kilometres away such as Kominterovna and Oktyabr. However, these names are the old “Russian” names which were changed in 2014, when lots of Ukrainian cities scrapped their former Soviet namesTherefore, it’s strange that Azov battalion would use these old Russian names when allegedly writing in Ukrainian today.Another discrepancy is the fact that the file does not have a clear date and is not addressed to anyone in particular. It also mentions a fifth and sixth wave of conscription of soldiers.However by April 2022, Ukraine was only undergoing its second military conscription, according to this Ukrainian legal website.It was in 2015 that the country underwent a sixth wave of recruitment. This article dating from 2016 states that the country will not organize a seventh wave of military conscription.After speaking to our Ukrainian journalists at Euronews, all of them confirmed that the text itself was poorly written, filled with many grammatical mistakes and even Russian wording.One telling example the word on top “cекретно” – which means classified. It’s common in Russian but isn’t really used in Ukrainian in this context.Although Euronews couldn’t confirm the exact origin of this document, all of these inconsistencies cast doubts on the authenticity of this file.