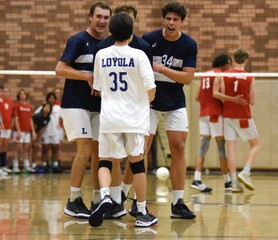 The No. 1 high school volleyball team in California was in deep trouble. Los Angeles Loyola lost its first set to Redondo Union in the opening round of the Southern Section Division 1 playoffs and was down 23-18 in the second set.Coach Michael Boehle had already made a startling change earlier in the set. He put in a player no one had seen or heard of all season. Grant Steuerwald, 5 feet 7 and 115 pounds, looked like a fifth-grader playing libero for the Cubs. He barely came up to the shoulders of his teammates.“People ask me if I’m a freshman,” he said.In January, he broke his left elbow and tore his triceps skiing in Colorado.“I was going down a hill, and my right ski came off. I hit a tree. Trees always win,” he said.For three months he was sidelined. Finally cleared to resume practice a week ago, the junior said he wasn’t expecting to be inserted into the opening playoff game. Boehle felt something needed to change. The libero in volleyball is so interesting. You just have to make passes. Loyola’s Grant Steuerwald looks like a sixth grader. He’s a junior and making contributions. pic.twitter.com/7do2AWdE10— eric sondheimer (@latsondheimer) May 4, 2022 “I had to make a decision,” he said. “I knew even though he didn’t have the reps, he could come in and steady us down.”So there was this small kid on the same court with Loyola’s 6-5 Dillon Klein, the No. 1 recruit in the nation headed to USC. And Steuerwald was coming through by fulfilling the duties of the libero — receiving serves, passing and making digs.It was so stunning to see someone so tiny making a huge impact in a high-caliber playoff game at the Division 1 level. It was an example of the magic of high school sports and how anyone possessing the fundamentals of a particular sport can step forward and contribute, particularly playing the libero position in volleyball.“If you have good hand-eye coordination and ball control, it’s the perfect position for you,” Steuerwald said.Said Klein: “He’s been grinding in practice and got his chance. He doesn’t play at the net, which requires height, physicality, vertical jump. He’s in the back row and digs balls and receives serves. Having a good libero is crazy good for a team.”Boehle said of Steuerwald’s contributions: “He stays so low to the ground that he sees everything smaller than everyone else. He’s a very smart libero. His job is to pass and play defense. That’s it. What he brings is steadiness.” Loyola libero Grant Steuerwald makes a dig in the Division 1 semifinals against Beckman.(Brody Hannon) Loyola would rally in the second set to defeat Redondo Union 25-23 and win the match in four sets. The Cubs also won their semifinal match Saturday against Irvine Beckman, advancing to the Division 1 championship match against Newport Harbor at Long Beach City College next Saturday.Steuerwald’s varsity debut won’t be soon forgotten. The scar on his elbow from his skiing injury is still there. He still looks out of place because of his youthful appearance. But under pressure, he proved he belonged on a court filled with giants.“It was definitely exciting,” he said.