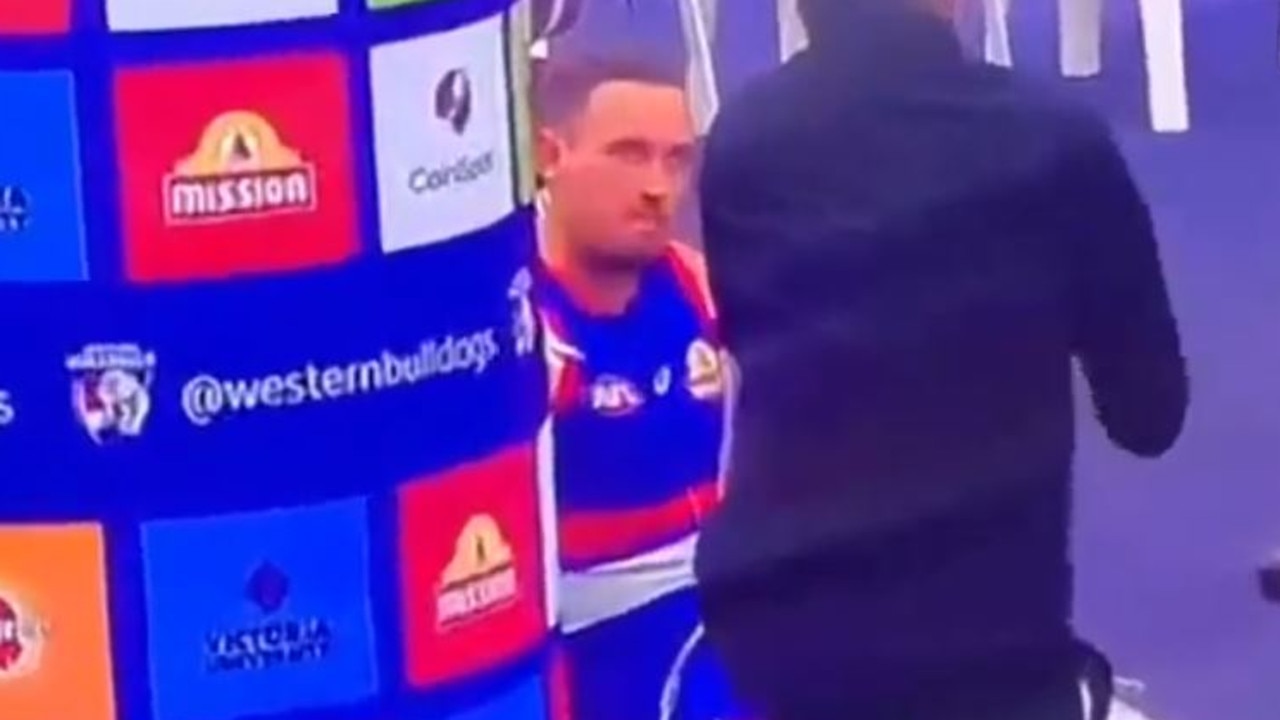 There were scary scenes Thursday night when Hayden Crozier inexplicably collapsed at half-time in the Western Bulldogs AFL match.

Western Bulldogs manager Luke Beveridge hopes defender Hayden Crozier felt nothing but “dizzy” when he passed out dramatically in the rooms at half-time of the 12-point loss to Carlton at Marvel Stadium on Thursday night.

Crozier had to be replaced by play due to the incident, which brought back frightening memories of former Port Adelaide player Nathan Eagleton and former St Kilda defender Dylan Roberton, both of whom collapsed while on the pitch respectively in 1999 and 2018.

Stream every game of every round of the Toyota AFL Premiership Season 2022 live and free in-play ad-break on Kayo. New to Kayo? Try now 14 days for free>

However, in a positive sign for Crozier, who appeared to have received oxygen from the paramedics, the Bulldogs medical staff think he is fine and will be monitored by them at night.

“He just passed out,” Beveridge said.

“We’re all worried about him… we’re not sure why, but he just got dizzy and passed out – old fashioned passed out.

“So obviously you make sure right away that he takes care of him and I think he’s in good hands.”

Crozier wasn’t the only injury problem for the Bulldogs, with striker Aaron Naughton playing with a severely tapped calf in the last quarter.

“I thought he might be out for the game, but it was one of those caps you get when you don’t have flexed muscle, so it really goes deep,” Beveridge said.

“He was capable of racing and we just have to make sure he doesn’t bleed too much and hopefully he’s right next week.”

Beveridge also hopes star midfielder Bailey Smith will be available to face the Swans after missing Thursday night’s game due to a hip flexor problem sustained during training.

“It stopped a bit marginally after our late main session,” Beveridge said.

“It was just tight in the hip flexor and our staff thought it better be missing (Carlton’s match), including him, so hopefully he’ll come close.”

Smith’s absence made itself felt in the middle of the ground when the Bulldogs were cleared at disputed possessions for the second consecutive week by the Blues. Eight days after finishing 20 in that category against Melbourne, the Dogs plunged to new depths against Carlton, losing the stat by a whopping 36.

“It’s always a concern when you get beaten up in that area,” Beveridge said.

“We have to improve in this, inside and out. We’ve been through two weeks in a row. We played two really good teams to which we lowered the colors, but we are about to come. “

After trailing 37 points at halftime, the Bulldogs were back in the game but were disappointed with some poor kicks from the back, particularly bad set shots in the third and fourth quarters. Beveridge said they would continue to work on that skill during training throughout the week.

“It’s not that we don’t spend enough time on it, which is a shame,” he said.

“A lot of those shots in the last quarter came from a good way out, which isn’t ideal, there’s no question they were achievable.

“We needed to kick some of them. I think probably one or two of those in the third quarter were really expensive when we were really coming and one hit the post and we missed another one at close range just to smell a goal would have been ideal, but it didn’t have to be.

Meanwhile, Beveridge said with a laugh that he hoped Sydney champion Lance Franklin had kicked the four goals he needed to reach 1000 career goals Friday night against Geelong before playing for his Bulldogs next week.

“I always want the best for Lance, so it would be nice to get that out of the way before they play us,” he said.