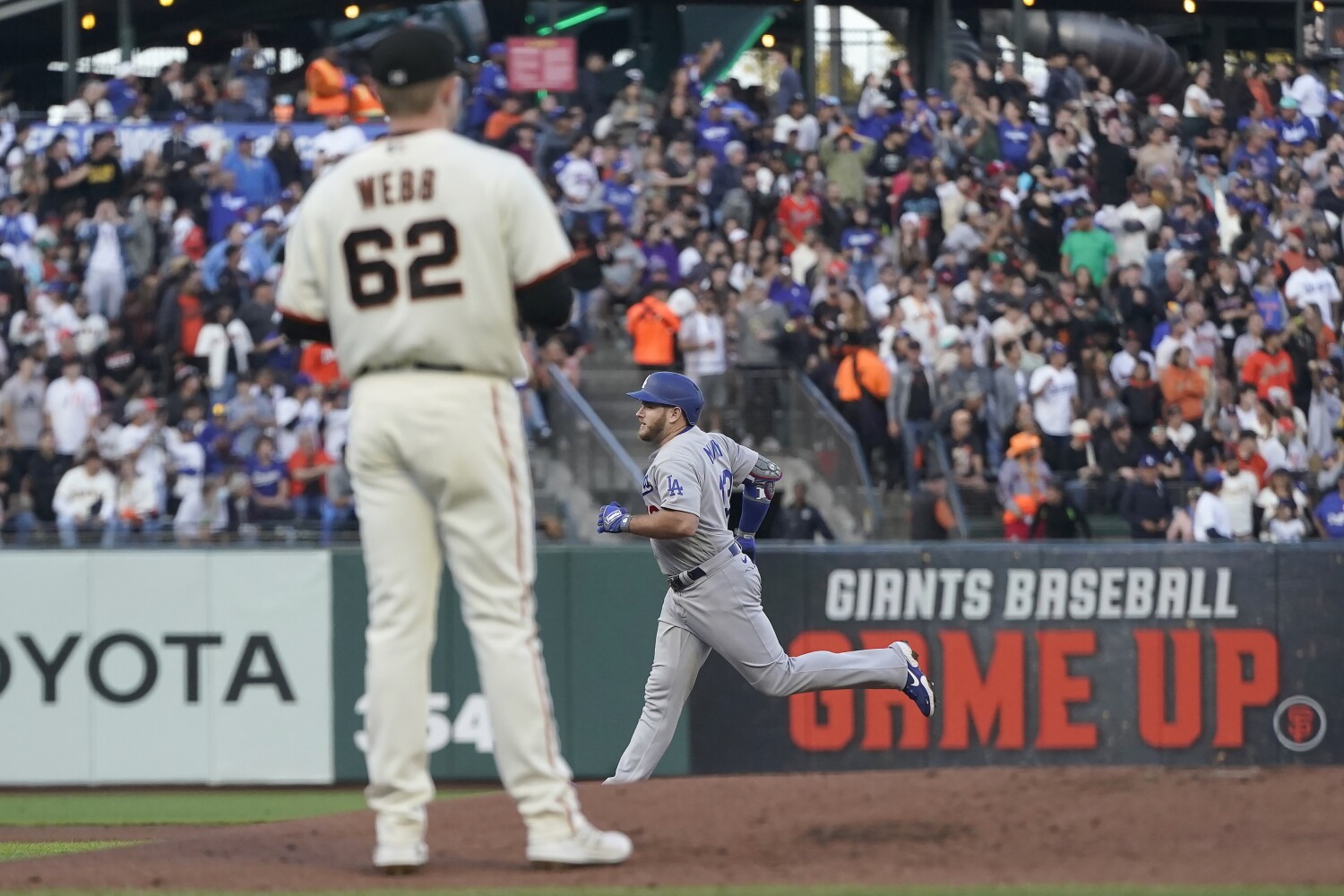 SAN FRANCISCO — The Dodgers and San Francisco Giants met for the 10th time in 2022 on Monday night. The Dodgers won 8-2 to begin a four-game series without much of a sweat. When the rivals play again Tuesday, they’ll undoubtedly take the field at Oracle Park with different rosters for different reasons.The Dodgers are contenders, again, coasting to their 10th straight postseason appearance with the highest winning percentage in the major leagues. The Giants are not. Winning 107 games and the National League West title last season appears to have been a stunning mirage. They’re 18 1/2 games behind the Dodgers with 59 remaining. A wild-card berth remains within reach — they ended Monday 4 1/2 games out of the final spot — but a deep October run is unlikely.How unlikely? Unlikely enough for San Francisco’s front office to reportedly switch to sell mode ahead of Tuesday’s 3 p.m. trade deadline. The Dodgers occupy the other side. They’re buying, and they’re shopping where it’s expensive.The Dodgers remain interested in Juan Soto, the summer’s best available player, according to people with knowledge of the situation. Chicago Cubs All-Star Ian Happ is on the radar if the Washington Nationals trade Soto elsewhere. On the pitching front, the Dodgers have discussed right-handed starter Pablo López with the Miami Marlins.Each player would represent an upgrade for a roster without any glaring issues beyond an uneasy closer situation they could resolve internally for October. But the Dodgers don’t need to make a move. They could win the World Series as currently constructed. They’re operating in a position of strength, again ready to pounce for another All-Star-caliber player to follow Rich Hill, Yu Darvish, Manny Machado, Max Scherzer and Trea Turner in deadline deals in recent years.It’s a position San Francisco envies. The Giants have holes everywhere on their roster. They’re old. They don’t boast nearly as much top-end talent as the Dodgers. Their farm system, by all accounts, lags behind. So, they’re expected to trade soon-to-be free agents to contenders for minor leaguers by Tuesday afternoon.Outfielder, and former Dodger, Joc Pederson expects to be traded after making the National League All-Star team last month. Left-hander Carlos Rodón, the club’s other All-Star, might be. Veterans Brandon Belt and Evan Longoria are also pending free agents who could end up wearing different uniforms by Wednesday. San Francisco Giants’ Joc Pederson bats against the Dodgers on July 21 at Dodger Stadium.(Marcio Jose Sanchez / Associated Press) A sale would leave the Giants playing for third place — where they finished the two years before last season’s unexpected success — before entering an expected busy offseason with just $100 million on the books for 2023.Sitting between the rivals in the NL West standings are the San Diego Padres. A.J. Preller, the Padres’ president of baseball operations, is known for aggressive maneuvering. The trait became evident again Monday when he traded four minor leaguers to the Milwaukee Brewers for Josh Hader, perhaps the best closer in the majors.They might not stop there. The Padres are one of the other two teams vying for Soto along with the St. Louis Cardinals. They’ve been linked to Happ and All-Star catcher Willson Contreras of the Cubs. Last summer, they nearly beat out the Dodgers for Scherzer and Turner. The rumor mill doesn’t churn without the Padres. And yet, even if Soto lands in San Diego, the Dodgers would probably remain favorites to win the pennant. They’re 12 games ahead of San Diego with a 100% chance of reaching the postseason, according to FanGraphs. Walker Buehler, Dustin May, Blake Treinen, Chris Taylor and Edwin Ríos could all eventually rejoin the team by the end of September. They’re loaded and they’re better than the 106-win club that finished a game behind the Giants last season. The inverse franchise trajectories were apparent on the field Monday.The Dodgers scored six runs in five against Logan Webb, one of the few Giants who hasn’t regressed this year. Andrew Heaney held the Giants to one run over four innings in his second start off the injured list. James Outman, the Dodgers’ No. 9 hitter, reached base four times in his second career game. Will Smith hit two doubles. Trea Turner and Max Muncy homered. The firepower overwhelmed the Giants.The clubs will meet three more times this week. They’ll have made moves. One with eyes on October, the other recognizing this isn’t the year.