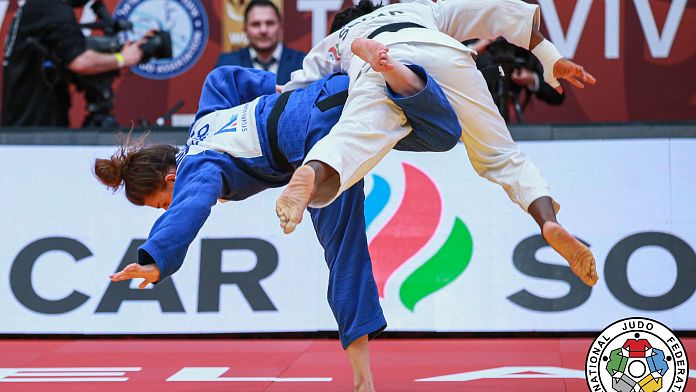 The Shlomo Arena was once again full to capacity for the final day of the Tel Aviv Grand Slam.International Judo Federation President Marius Vizer presented Amit Tal, owner of Bonei Ra’anana, with a Jigoro Kano statue, designed by Herend Porcelain.20th medal for MehdiyevAt -90kg, Mammadali Mehdiyev defeated former World Champion Nemanja Majdov of Serbia with a spectacular ura-nage.It was a 20th world tour medal for the incredibly consistent Azerbaijan Judoka.Marius Vizer, President of the IJF, presented the medals.Beata Pacut of Poland performed consistently in the preliminaries, and in the final, she defeated Alina Boehm of Germany to take her first-ever grand slam gold.Michael Michaely, CEDCO Hungary Chairman awarded the medals.Rising star award winner Ilia Sulamanidze from Georgia beat Michael Korrel from the Netherlands to take the -100kg title. It was a first grand slam gold medal for the 20-year-old.Israeli Knesset Member Miri Regev presented the medals.Fourth gold for FranceRomane Dicko gave France their fourth gold of the tournament, defeating Beatriz Souza from Brazil in the +78kg contest.Amit Tal, the owner of Bonei Ra’anana awarded the medals.“I think that Paris and Israel are the two best places to compete in the Judo tour,” said Dicko. “Because you know there are a lot of people. People are yelling. So it is a very good atmosphere and I’m always very happy to compete in Israel.”Georgia’s Guram Tushishvili was our man of the day for his victory over the Brazilian giant Rafael Silva in the +100kg category.World-famous singer Moris Janashvili awarded the medals.“We are professionals, judo is a part of our life, we are living with judo,” Tushishvili said afterwards. “Of course, the thing I liked the most and what I missed is competing – especially with this kind of audience, fans and support.”Local fans have two bronze medals to cheerOn the final day, the heavyweight Israeli Judoka built on the momentum their teammates had established on days one and two.The Shlomo Arena has been packed with some of the most enthusiastic and passionate fans in the World of Judo – and local heroes Raz Hershko and Peter Paltchik rewarded them with two hard-fought bronze medals.Their achievements rounded off a phenomenal Grand Slam that cements this tournament as one of the true highlights on the World Judo Tour.