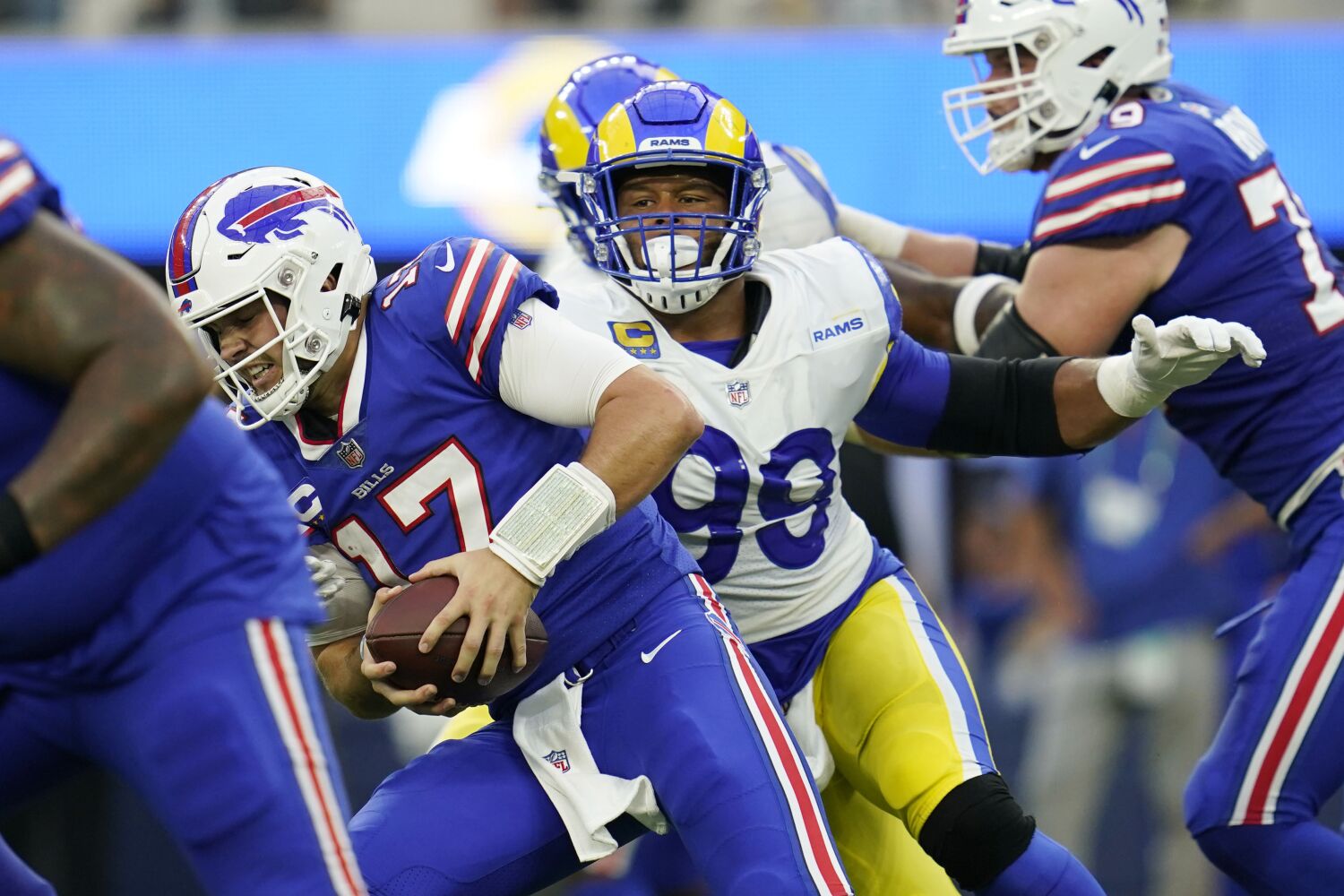 Aaron Donald is synonymous with the number he wears on his jersey: 99.That is also the number of sacks the Rams’ star defensive tackle has amassed since he entered the NFL in 2014.On Sunday against the Atlanta Falcons, Donald could join the 100 club.“Anytime you accomplish something, it’s a great honor,” Donald said Thursday. “But obviously, I’m just out there playing. Not thinking about it, just playing the game trying to do what I can to help my team to win.”Donald, 31, entered the season with 98 sacks. He had one in the Rams’ embarrassing season-opening defeat to the Buffalo Bills at SoFi Stadium.It was “a humbling experience,” Donald said of the defeat, echoing coach Sean McVay.The Rams are eager to put it behind them when they play a Falcons team that blew a 16-point, fourth-quarter lead in a 27-26 defeat to the New Orleans Saints.“Guy are locked in,” Donald said. “Just talking to a couple of the veteran guys. … I know where everybody’s minds’ at.“So, I think we’re in a good place.”The 6-foot-1, 280-pound Donald continues to climb the NFL career sack list and earn a certain spot in the Hall of Fame as perhaps the most productive interior lineman in pro football history.Donald, the 13th pick in the 2014 draft, is a three-time NFL defensive player of the year. He is a seven-time All-Pro and has been voted to the Pro Bowl in each of his eight NFL seasons.“Aaron is the greatest football player that probably most of us have been around,” Rams defensive coordinator Raheem Morris said, adding, “We’re just lucky enough to be able to watch it.”The NFL did not make sacks an official statistic until 1982. Former Buffalo defensive end Bruce Smith is the all-time leader with 200. Donald ranks 40th on a list dominated almost exclusively by defensive ends and outside linebackers.By the count of Profootballreference.com , which tabulated sacks since 1960 and includes Rams legends such as Deacon Jones (173½ sacks) and Jack Youngblood (151½) among the top six, Donald ranks 62nd.Von Miller (117½), Chandler Jones (107½), Cameron Jordan (107), Justin Houston (103), J.J. Watt (102) and Robert Quinn (101) are active players with 100 sacks or more. All are defensive ends or linebackers. Rams quarterback Matthew Stafford sits on the turf after former teammate, Bills linebacker Von Miller, sacked him. Miller is the NFL’s active career sacks leader.(Wally Skalij/Los Angeles Times) Donald accrued more than one-fifth of his sacks in a single season. In 2018, he produced 20½, the most by an interior lineman. The Rams advanced to the Super Bowl LIII where they lost to the New England Patriots.Last season, Donald had 12½ sacks. He had two in the Rams’ 23-20 victory over the Cincinnati Bengals in Super Bowl LVI — increasing his career postseason total to six — and clinched the win by pressuring Bengals quarterback Joe Burrow into a desperation pass that fell incomplete.After Donald hinted at retirement, the Rams gave him a three-year $95-million extension that includes $65 million in guarantees, according to overthecap.com. He is the highest-paid non quarterback in NFL history.Donald grew up in Pittsburgh watching the Steelers and standout defensive players.Nose tackle Casey Hampton, linebacker James Harrison and safety Troy Polamalu were among Steelers players he tracked, along with Baltimore Ravens linebacker Ray Lewis.“Just gravitate to them type of guys,” Donald said.Rams defensive tackle Greg Gaines is amazed by Donald, and him being on the verge of his 100th sack.“Rushing inside, you don’t have as much space, like you always have somebody on your right or left,” Gaines said. “So getting 100 sacks from an interior lineman has got to be up there in football feats.”Etc.
Linebacker Leonard Floyd (knee), receiver Van Jefferson (knee), center Brian Allen (knee) and long-snapper Matthew Orzech (calf) did not practice, according to the Rams injury report. Offensive tackle Joe Noteboom (knee) was limited.