Trump praises Saudi-backed LIV Golf during event at his club 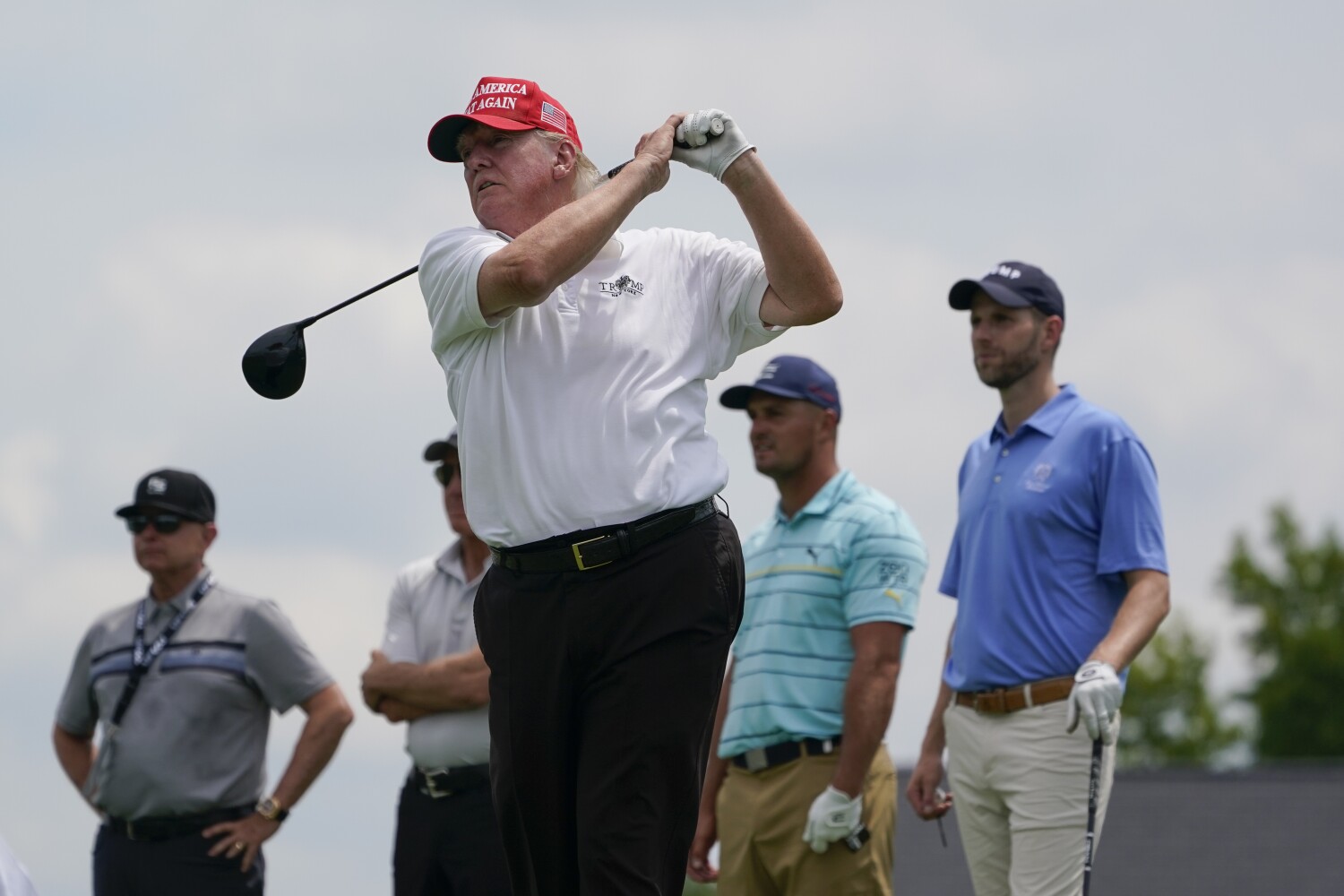 Donald Trump loves golf but has a beef with the PGA Tour.And he has never been one to shy away from controversy.Add it up, and it should come as no surprise that an LIV Golf event is being held this weekend at Trump National Golf Club in Bedminster, N.J., but that the former president also played in Thursday’s pro-am in advance of the tournament.“Frankly, what they’re doing for golf is so great, what they’re doing for the players is so great,” Trump told ESPN of the Saudi-backed LIV during Thursday’s event. “The salaries are gonna go way up. The PGA was not loved by a lot of the players, as you know, for a long time. Now they have an alternative and nobody would’ve ever known there was gonna be a gold rush like this.”Trump and his son, Eric, were teamed with LIV golfers Dustin Johnson and Bryson DeChambeau, who have played golf with the former president in the past. Trump wore a white polo shirt and a red “Make America Great Again” cap and drove his own cart, which was decorated with the presidential seal and carried his red, white and blue golf bag. Former President Donald Trump watches Dustin Johnson putt during a pro-am round Thursday at Trump National in Bedminster, N.J.(Seth Wenig / Associated Press) He bogeyed the first hole and was two-over after four holes.Among the crowd watching the former president’s group were his daughter, Ivanka Trump, and her husband, Jared Kushner. Other celebrities taking part in the event included Caitlyn Jenner, Charles Barkley and Lawrence Taylor. Former President Donald Trump talks to golf fans Thursday at Trump National in Bedminster, N.J.(Seth Wenig / Associated Press) In its first year of existence, LIV Golf has been condemned by many for its ties to a Saudi government that has been accused of numerous human rights violations.Family members of victims of the Sept. 11, 2001, terrorist attacks oppose the tour. One group of 9/11 victim family members launched an ad campaign criticizing Trump for hosting an LIV event so close to the former World Trade Center site where many of them lost loved ones.“This golf tournament is taking place 50 miles from Ground Zero,” one man says in an ad.“It’s disgusting,” another woman adds.Trump National Golf Club was selected to host the men’s PGA Championship this year, but the PGA of America pulled the tournament out of Trump’s club days after a violent group of his supporters took part in the deadly Jan. 6, 2021, attack on the U.S. Capitol.Trump was asked Thursday by ESPN how he would respond to family members of 9/11 victims who oppose the event at his club. From left: Eric Trump, Bryson DeChambeau, Dustin Johnson and Donald Trump pose for a photo during their pro-am round Thursday in Bedminster, N.J.(Seth Wenig / Associated Press) “Well, nobody’s gotten to the bottom of 9/11, unfortunately, as to the maniacs that did that horrible thing to our city, to our country, to the world,” he said. “So nobody’s really been there.”Trump then went back to singing the praises of LIV.“But I can tell you that there are a lot of really great people that are out here today and we’re gonna have a lot of fun and we’re going to celebrate and money’s going to charity, a lot of money’s going to charity,” said Trump, whose club in Doral, Fla., will host an LIV event later this year. “And you have really the best players in the world, many of the best players in the world, and soon you’ll probably have all of them because remember this, [when] there’s a merger, the people that didn’t come, they will never get anything except a thank you from people that took advantage.”