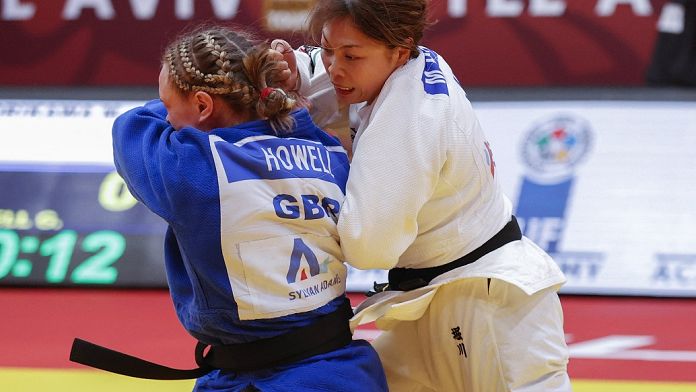 Day Two of the Tel Aviv Grand Slam had fans buzzing with anticipation.The previous day International Judo Federation president Marius Vizer had presented Israeli Judo Association President Moshe Ponte with the Judo for Peace award. Israel participated against Saudi Arabia during the Tokyo Olympics.The Japanese judo team only sent four women to this year’s Tel Aviv Grand Slam – and two of them picked up gold on day two.Horikawa takes gold ten years onMegumi Horikawa took the -63kg gold, nearly ten years after winning her last grand slam title in Tokyo. She beat Britain’s Gemma Howell, who was competing in her first-ever tour final.IJF Sport Director Mike Tamura presented Horikawa with her medal.Hidayat Heydarov from Azerbaijan was top seed in the men’s -73kg contest and he lived up to his billing, with victory in the final against Obidkhon Nomonov from Uzbekistan.Victory came in extra time, with a spectacular koshi-guruma for a waza-ari. The last time the Azeri champion won gold in a grand slam was in 2019.Dr Lisa Allan, the IJF Events director, awarded him with his medal.Shiho Tanaka got Japan’s second gold with victory over Sanne Van Dijke from the Netherlands in the -70kg category. An uchi-mata for waza-ari proved enough to give Tanaka the title.Florin Daniel Lascau, IJF Head Referee Director, handed out the medals“It was fantastic to have all the audience there”, Tanaka said. “The crowd made it a much more exciting experience.”Casse finally gets the better of AlbayrakThe top two seeds made it to the men’s -81kg final, which saw Matthias Casse from Belgium face Vedat Albayrak from Turkey. Albayrak had won their previous two contests, but this time it was Casse who came out top. The winning action came after four minutes of golden score, when Casse executed a unique juji-gatame for ippon.Armen Bagdasarov, IJF Head Referee Director gave out the medals. Casse’s fellow Belgian Sami Chouchi picked up a bronze.“It’s amazing to share a podium with someone from your country,” said Casse. “Sami has been a good friend for so long, and it’s just fun to hang out on the podium together.”It’s clear why Judo is so popular in Israel, with local stars displaying putting on intense performances throughout the day. After golden success on day one, the momentum continued through day two, buoyed on by the passionate cheers from local supporters in the Shlomo Arena.They got their reward when Tohar Butbul defeated Italy’s Giovanni Esposito to take bronze in the under 73 kilos contest, to an almost deafening ovation from the crowd.Day three will bring in the heavyweights – and an incredible string of Israeli superstars for the crowd to cheer on. A day of action not to be missed.