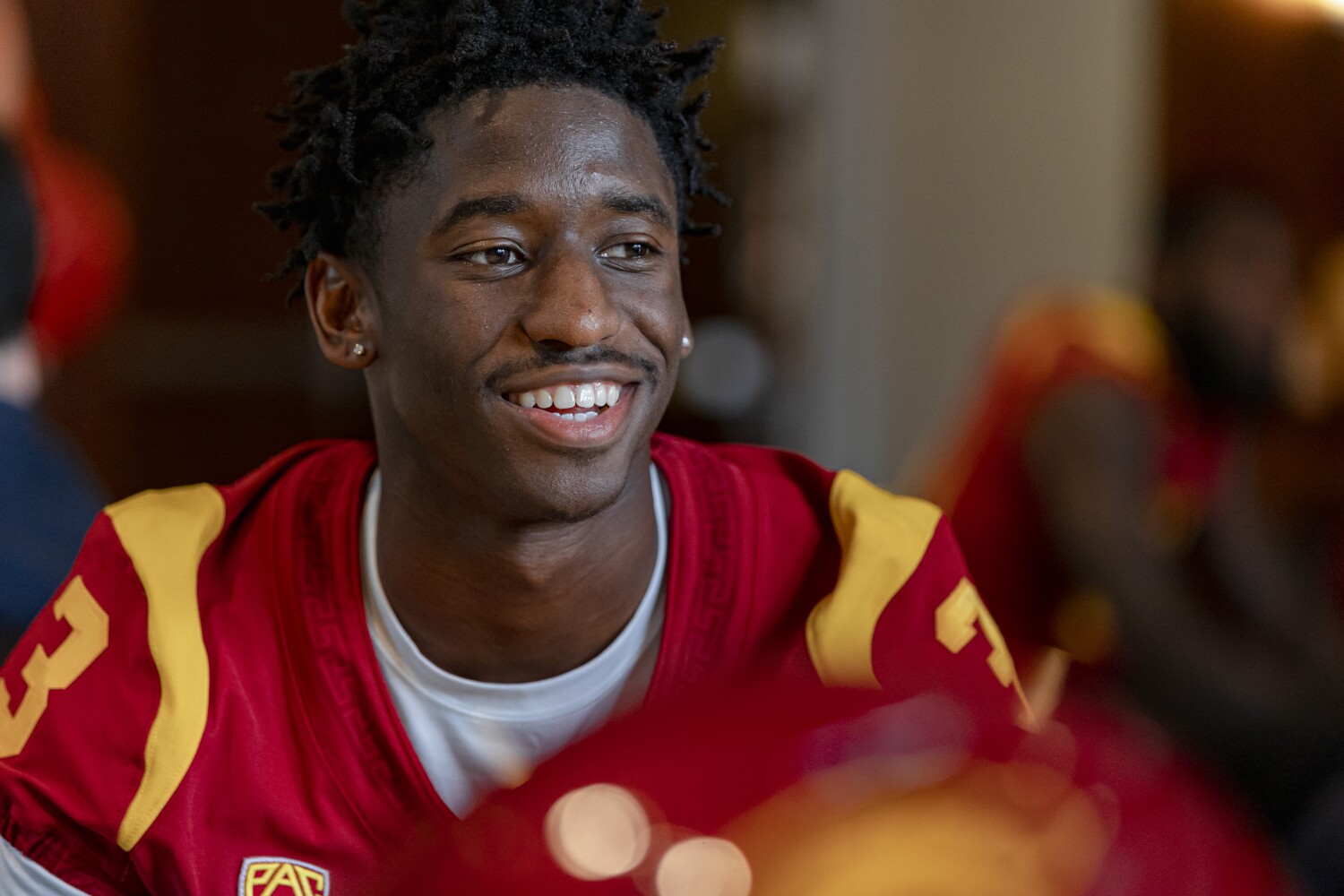 Jordan Addison first saw the news on social media.Not only was the reigning Biletnikoff Award winner’s potential transfer blowing up online, but it also came with an extra scoop of controversy. ESPN reported on April 29 that Addison was considering USC as a destination before officially entering the portal. Pittsburgh officials cried “tampering.” Pitt coach Pat Narduzzi placed multiple frustrated calls to USC’s Lincoln Riley. Critics wondered if Addison was selling out for name, image and likeness deals.Three months and one new school later, Addison, sporting a freshly pressed USC jersey, had a simple response.“Just some BS,” Addison said Thursday, meeting with local media for the first time since transferring to USC. “But I mean, the truth always going to come to light, so I just make sure I’m just going to keep working and make sure I’m ready for the season.”Following the contentious journey through the transfer portal, Addison finally will get to work with the Trojans as Riley opens his first fall camp Friday. USC wide receiver Jordan Addison answers questions during USC media day Thursday.(Wesley Lapointe / Los Angeles Times) “I wasn’t coming out here for all the lights, camera, action and all that. I just wanted to make sure they knew that I was strictly business.” — Jordan Addison The 6-foot junior had 1,593 receiving yards and 17 touchdowns on a school-record 100 catches last season, earning the Biletnikoff Award honoring the nation’s most outstanding receiver. Such a proven talent rarely enters the transfer portal, adding another layer of suspicion to Addison’s decision. But it came down to a simple gut feeling, Addison said.While many critics concentrated on the rumors of multimillion-dollar NIL opportunities, Addison was connecting with the USC coaching staff during his recruiting visit over long film sessions. Addison and Riley spent so much time talking football that they skipped extraneous recruiting rituals such as fancy meals or planned entertainment.“I wasn’t coming out here for all the lights, camera, action and all that,” Addison said. “I just wanted to make sure they knew that I was strictly business.”Addison said he didn’t feel a need to reach out to Narduzzi to address the accusations, but added he was grateful that the staff allowed him to start his college career at Pitt. When asked if he was disappointed that the speculations were a final, sour note of his accomplished Pitt career, Addison shrugged.“They say it’s a business,” he said, “so sometimes you gotta make decisions for you.”Outside wide receivers coach Dennis Simmons said he was worried the controversy would cause friction in the USC program. Simmons said when the reports surfaced, he called every player in his position room and explained he hadn’t spoken to Addison yet and wasn’t sure if the top prospect was transferring to USC. “When you attack someone’s character and integrity, especially when you’re supposedly a mentor or caregiver, of course you’re hurt,” Simmons said. “I try to really not harp on his past with him, from that standpoint, just because at this point what good is going to come out of it? I don’t know his previous head coach, don’t have a relationship with him. He’s here now, and I just let him know how we feel about him.” USC wide receiver Jordan Addison talks with reporters at media day on Thursday.(Wesley Lapointe / Los Angeles Times) USC teammates couldn’t hide their excitement about the top receiver who has scorched the field during summer conditioning and player-run practices. Running back Travis Dye joked he saw smoke coming off Addison’s shoes when players were running sprints and Addison was measured close to 23 mph. “Jordan Addison is a freak of nature,” said Dye, a transfer from Oregon. “That man can run like a gazelle, has hands like nobody’s business. I always compare him to Calvin Ridley because he just has that type of running style and his cuts are just super smooth.”Addison walked into USC’s media day event on campus wearing a No. 3 jersey, the same number he wore at Pitt. The jersey was retired at USC in honor of quarterback Carson Palmer, but the Heisman winner gave Addison his blessing to sport the number he has worn since high school.Getting on the phone with Palmer was nerve-racking, Addison said, but he was quick to note his appreciation for the gesture.“I’m just gonna make sure he knows he put the number on the right person,” Addison said.Staff writer J. Brady McCollough contributed to this report.