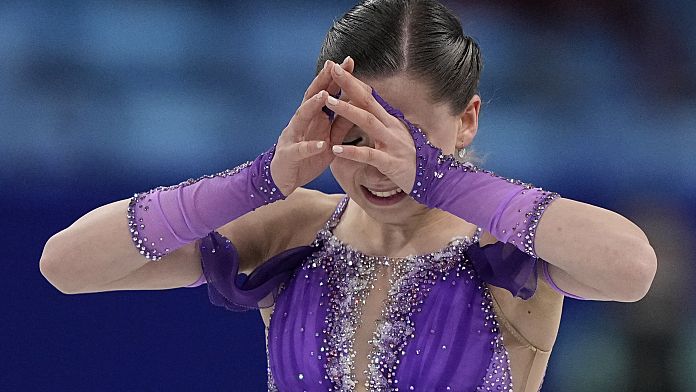 Kamila Valieva topped the leaderboard at the end of the short programme in women’s individual single skating at the Beijing Winter Olympics on Tuesday.

The 15 year-old Russian at the centre of the latest Olympic doping controversy scored 82.16 points to put her in first place, ahead of fellow Russian and reigning world champion Anna Shcherbakova.

Japan’s Kaori Sakamoto lies in third, while RussianAlexandra Trusova, who fell on her opening triple axel, is in fourth place.

The trio of Russian women are trying to deliver the second podium sweep in Olympic figure skating and the first in the women’s competition. The free skate is scheduled for Thursday night.

Valieva tested positive in December for a banned heart medication, although the result only emerged last week, after her two brilliant performances in the team competition helped win gold for the Russian team.

The Court of Arbitration for Sport ruled on Monday that Valieva should be allowed to continue to compete, in part because she is a minor, known as a “protected person”, and is subject to different rules to an adult athlete.

However, the decision from a three-person panel has attracted broad criticism.

Valieva is under enormous pressure and scrutiny, and there were tears in her eyes as she skated off the ice following her performance.

The young skater did not speak afterwards. The Russian Olympic Committee also declined to bring her to the news conference, which is required only for medal rounds.

Lawyers for Valieva also “brought some doubts about her guilt,” veteran IOC member Denis Oswald said on Tuesday. Russian lawyers speculated that the sample may have been contaminated by medicine her grandfather was taking.

In her only comments since the drug test surfaced, Valieva told Russian state broadcaster Channel One on Monday night that “these days have been very difficult for me. I’m happy but I’m tired emotionally.”