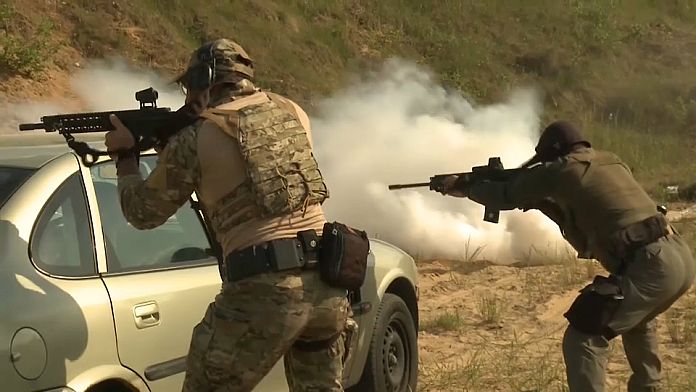 Pro-democracy Belarusian dissidents are waging war games and learning to shoot a pistol and other weapons in Poland. Under the watchful eye of a police officer turned private shooting instructor, recruits are preparing to join the Ukrainian resistance.

Poland has become a safe haven for many Belarusians seeking to escape President Alexander Lukashenko’s Soviet-style autocracy. The longtime leader has maintained a tight grip on power since 1994.

For Belarusians, who see Ukrainians as a brotherly nation, the stakes are particularly high. Russian troops have used Belarusian territory to invade Ukraine since the early days of the war, and Lukashenko has publicly supported his longtime ally, Russian President Vladimir Putin, describing him as his “big brother”. Russia, for his part, has pumped billions of euros into Lukashenko’s state-controlled economy with energy and cheap loans.

Some of the Belarusian fighters are just passing through on their way to Ukraine, while others have remained for training.

“We taught tactics, the use of weapons during an attack, defense. In general we started from the beginning, that is, we taught these people the basics of shooting, how to hold a weapon, how to reload, how to change magazines. , how to work together as a team and how to react to an attack or ambush, “says Dariusz Tomysek, a Polish military instructor.

Another man, Vadim Prokopiev, heads a unit called “Pahonia” which has overseen the new recruits in recent days.

“We understand that it is a long journey to liberate Belarus and the journey begins in Ukraine,” says Prokopiev, a businessman who ran restaurants in Minsk. He fled the country after rumors spread that he would be arrested for publicly claiming that the government was not doing enough for small businesses.

“When the war in Ukraine ends, our war will begin. It is impossible to liberate the country of Belarus without expelling Putin’s fascist troops from Ukraine, ”he says.

The 50-year-old wants his men to gain critical battle experience and hopes that one day a window of opportunity for democratic change in Belarus will soon open. But he says he will require fighters like him to be prepared and for members of the security forces in Belarus to turn against Lukashenko.

“The whole battalion is made up of people who, like Vadim, are tired of Lukashenko,” says Matthew Parker, a former member of the US military who is also on site in Poland. “They hate Russia because of their interference and they see Ukrainians as their brothers and say: ‘look, if we help Ukraine and beat the Russians, we teach our people that you can resist’.”

Massive protests erupted in the streets of Minsk after the president won another term in the 2020 elections. Although the opposition claims the elections were fraudulent, the ensuing demonstrations were met with brutal crackdowns, leading to the Prokopiev’s belief that a “velvet revolution” cannot be expected.