Calmes: The abortion vote in Kansas shows that populism can work for Democrats too 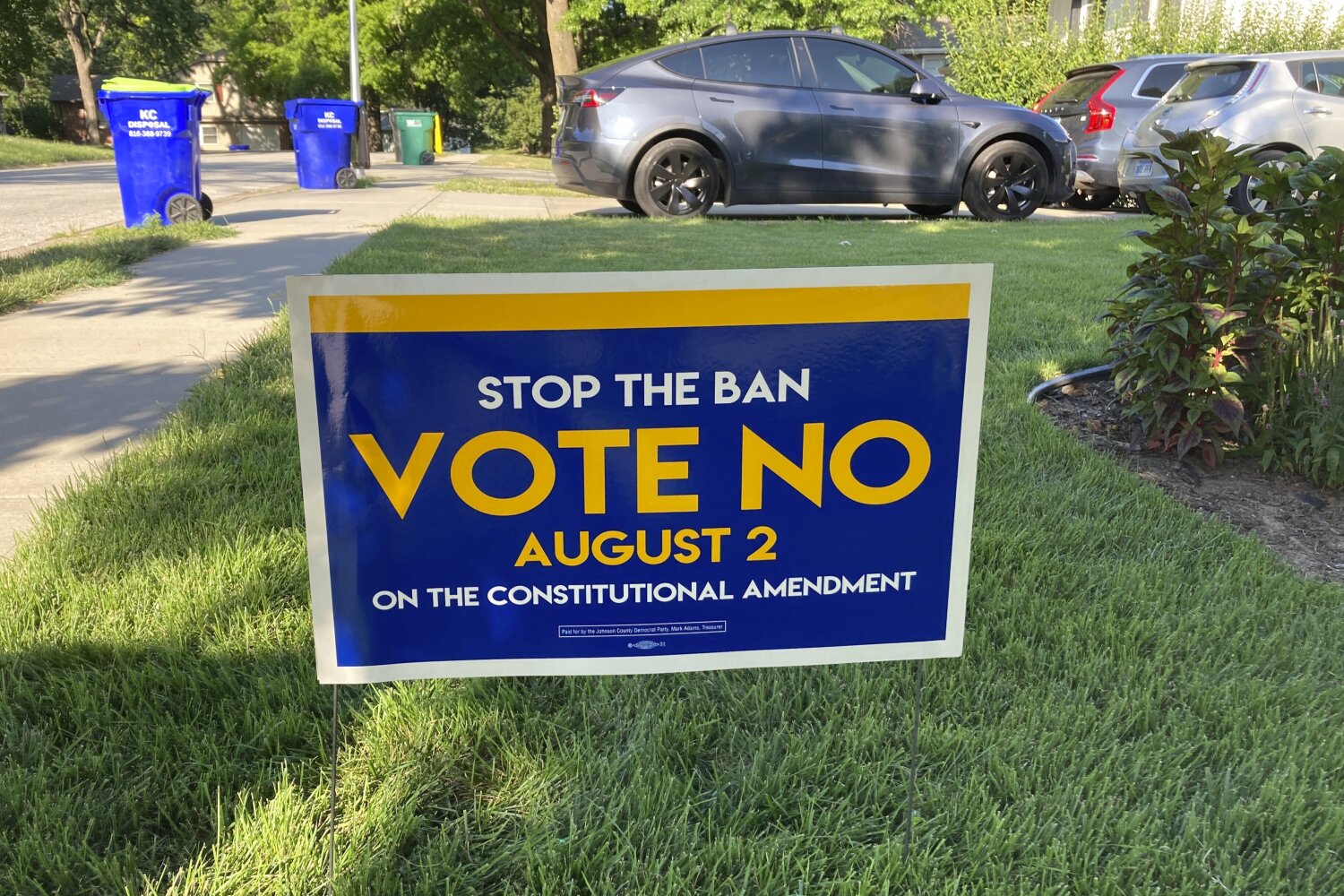 Justice Samuel A. Alito Jr. seemed to enjoy the yucks he got from a friendly audience abroad when he recently mocked foreign leaders by name, and Prince Harry, too, for criticizing the Supreme Court opinion he wrote robbing Americans of their federal constitutional right to abortion.Most Americans didn’t find Alito’s schtick at all funny, however. And now voters in Kansas — Kansas! The scarlet-red state that hasn’t sent a Democrat to the U.S. Senate since Franklin Roosevelt was first elected — have delivered their verdict on Alito’s handiwork: No. By 18 percentage points, they voted this week to keep a right to abortion in their state Constitution.Take that, Sam.The unelected Alito, however, has a lifetime seat on the Supreme Court, and he’s professed to being unconcerned by public reaction to its outside-the-mainstream conservative decisions. As he wrote in Dobbs vs. Jackson Women’s Health Organization, justices can’t fret over such “extraneous influences.” Opinion Columnist Jackie Calmes Jackie Calmes brings a critical eye to the national political scene. She has decades of experience covering the White House and Congress. Do you know who is concerned? Republicans who aren’t life-tenured in their jobs, and who are facing election or reelection this fall. They and their handlers do have to care what the public thinks. And voters’ reaction in Kansas — the first electoral test of the issue since the court’s 5-4 decision in June overturning a half-century of abortion rights precedents — now suggests a potential breakwater against the red wave Republicans were counting on in November to sweep them into control of Congress and top state offices.Polls showed a backlash against Dobbs was galvanizing Democrats and left-leaning independents even before Kansans voted. Whether that anger can offset Americans’ inflation concerns and President Biden’s unpopularity is a big question. Yet Democrats suddenly are more confident they can keep their Senate majority, and Republicans more worried, according to my reporting.Republicans still are widely favored to capture the House majority, yet no less than former Republican Party Chairman Michael Steele and George W. Bush political strategist Matthew Dowd predicted on MSNBC, post-Kansas, that Democrats could hold on to power in both houses. But few other states are expected to have abortion rights on the ballot this fall, to similarly act as a magnet pulling pro-choice voters to the polls. Democrats’ challenge is to make Republican candidates personify the threat to reproductive freedom either in the states or in Congress, where Senate Minority Leader Mitch McConnell (R-Ky.) has joined the call for a nationwide ban. “Republicans are making it very easy to do that,” says Democratic pollster Geoff Garin, given the far-right extremism of the candidates they’re nominating.The Democrats’ Senate Majority PAC, for which Garin works, is now airing a video ad assailing Blake Masters, winner of this week’s Arizona Republican primary to run against Democratic Sen. Mark Kelly, for favoring a national law against abortion without exceptions for rape, incest or a pregnant woman’s life. Kari Lake, Republican candidate for governor in Arizona, has hailed the Supreme Court for opening “a new chapter of Life … where we help women become the Mothers they are meant to be.”A closer look at the Kansas vote shows why Democrats have new hope and Republicans new fear: turnout.Hundreds of thousands more Kansans voted on the abortion measure than voted in both parties’ primaries, combined. The 900,000-plus voters were roughly double the total vote in Kansas’ two previous midterm primary elections. Their numbers approached the million-plus turnout highs of recent general elections for president.So much for the scheming of the Republican supermajority in the Kansas Legislature: It scheduled the abortion amendment vote for party primaries that typically have low Democratic turnout and are unfamiliar to Kansas’ 3 out of 10 politically unaffiliated voters, who usually can’t vote in them. Those independents could vote on the ballot measure, and they turned out against it.Not surprisingly, urban and suburban areas provided much of the opposition to the antiabortion amendment. But so did 14 rural counties that overwhelmingly favored Donald Trump’s reelection in 2020.That outcome was vindication of the strategy on the pro-abortion-rights side: to wrest the “freedom” banner from the Republican Party and argue that, regardless of your view of abortion, the government shouldn’t make people’s medical decisions and mandate pregnancy. Populism can work for both parties.The lopsided Kansas result also was a victory for direct democracy in these increasingly anti-democratic times. Contrast the people’s choice with the rush in red state legislatures — Indiana, for instance — to ban or severely restrict abortion. These lawmakers are insulated from popular opinion by gerrymandered districts; their only fear is a far-right party challenge if they show moderation.For that reason, between now and the 2024 election, Democrats will be trying to put more abortion rights measures before the public wherever states allow voter initiatives on the ballot.This prospect poses an opportunity to call Alito’s bluff. In his opinion, he essentially dared abortion rights supporters to use the ballot box to get their way in the states. “Women are not without electoral or political power,” he wrote (without explaining why he doesn’t think men have a dog in this fight).For Democrats to keep control of the Senate, powered by the abortion rights backlash, would be especially gratifying. It would deprive Mitch McConnell of his hoped-for return as majority leader in January — apt payback for the senator who busted norms to create the Supreme Court supermajority that enabled Roe’s reversal.Alito got the big win in June with his Dobbs opinion. But voters can make sure he doesn’t get the last laugh.@jackiekcalmes