Let’s start with Scott Morrison and the culture war. Today the prime minister once again defended Katherine Deves, his candidate for Warringah, after calling the gender reassignment intervention “mutilation”.

Morrison said she wouldn’t use Deves’ same language but continues to support her. The Liberal candidate was targeted during the early stages of the campaign after a series of tweets now deleted attacks by transgender people have emerged.

They included false claims that half of trans men are sex offenders and comparisons between anti-trans activism and Holocaust opposition.

Since then, Deves has largely avoided the media (despite Morrison’s claims that she would not be “canceled”), until she appeared on Sky News. last night to go back apologizing for calling trans people “surgically mutilated and sterilized”.

Faced with criticism from reporters today, the Prime Minister said gender reversal surgery was “a serious and significant problem” for young teenagers, before being reminded that the procedure is not available to minors in Australia. .

“I’m not a surgeon, I’m not the chief medical officer,” he said.

In the midst of it all, Morrison managed to find another constituency to fight with: lawyers.

“I don’t care if lawyers, attorneys and others up there on Macquarie Street – not in Parliament but in the lawyers’ chambers – don’t agree with me,” he said, during one of his now frequent attacks on the Independent Commission Against NSW. Corruption (ICAC). (Sure, real Sydney bosses know that lawyers are mostly at Phillip St, while Macquarie St is for the pollies, but I’m digressing). 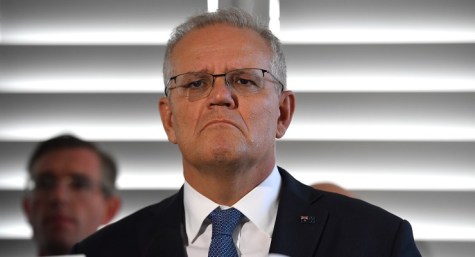 This attracted a quick reprimand from Australian Bar Association head Matt Collins, who said he was deeply concerned by Morrison’s comments.

“Anyone who has no problems with lawyers cannot have made a conscientious effort to understand their indispensable contribution to civil society,” he said. Ouch.

Morrison was out in Bennelong today once held by John Howard. With popular local MP John Alexander retiring, Labor has become increasingly optimistic about its chances of recovering the 6.9% margin.

Next to the prime minister was NSW premier Dominic Perrottet. With some symmetry, opposition leader Anthony Albanese campaigned with Victorian Premier Dan Andrews in Melbourne today.

None of the state leaders have appeared much during their parties’ respective federal campaigns, despite the unprecedented importance of the state premier over the past two years, and Perrottet and Andrews in particular have essentially guided Australia through the last phase of the pandemic.

There are some political and strategic reasons for this. Morrison and Perrottet have notoriously they have clashed in the past. Over the course of the campaign, the NSW premier has criticized Morrison’s comments on the state’s ICAC and distanced himself from the Prime Minister’s comments minority government.

And at today’s press conference Perrottet refused to join the Prime Minister in attacking Labor’s equity housing program, saying he was “open-minded” about the new policy.

The distance between Andrews, meanwhile, may be about avoiding what some Labor strategists fear is a boom of “anti-Dan” sentiment, particularly in the Melbourne suburbs among voters fed up with two years of pandemic restrictions.

Certainly liberals think the vote is out there to be taken, running stick up billboards with Andrews and Albanese together, alongside the words “More taxes. mandate. confinement”.

But likewise, both Perrottet and Andrews have their own elections to fight within the next 12 months, and they might feel better to have some clear air between their brands and the current shit show.

In other news, Alan Tudge was found. The government minister and backbencher (somehow he was both during this campaign), resigned in December following allegations that he had an abusive relationship with former staff member Rachelle Miller, which he denies.

Tudge, who essentially went into hiding during the campaign, was tracked down by Sky News reporter in his secure Aston location. He said he intended to return as education minister if the government is re-elected.

“The prime minister has made it clear that if we are to be re-elected and I am able to step back, I will,” he said.