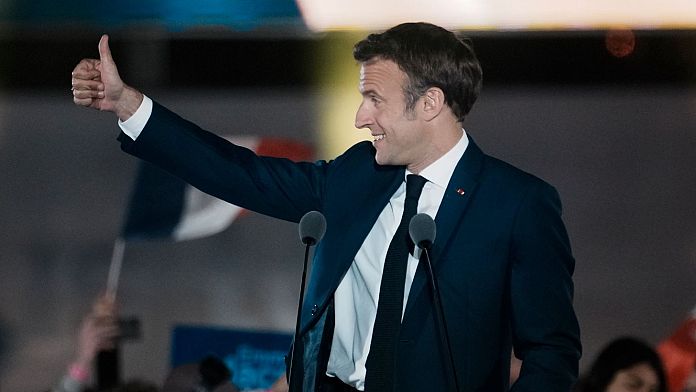 Emmanuel Macron has promised to be a “president for all” after winning the ballot in France.

The incumbent president delivered his winning speech from the Champ de Mars in Paris after winning 58% of the vote.

“This new era will not be the continuation of the five-year term that is drawing to a close, but the collective invention of a new method for five years of better service to our country and our young people,” said Macron.

The re-elected president arrived in central Paris surrounded by the wife and children of the members of his electoral team.

He approached his lectern from the Eiffel Tower to the tune of the Ode to Joy and the Anthem of the European Union.

“I want to thank all the French men and women who, in the first and second rounds, put their trust in me to carry out our project for a more independent France and a stronger Europe,” Macron told the crowd.

“I also know that many of our compatriots today voted for me not to support the ideas I bring but to block those of the far right,” he added.

“And I want to thank them here and tell them that I am aware that this vote obliges me for years to come.”

Macron also urged his supporters not to boo rival Marine Le Pen, who secured 42% of the vote in the second round. About 28% of the French electorate also chose to abstain.

“From the beginning I never asked you to blow the whistle. Because from now on I am no longer the candidate of a field but the president of all.”

“I know that for many of our compatriots, who today have chosen the far right, we must also respond to the anger and disagreements that led them to vote for this project. This will be my responsibility and that of those around me”, he Macron added.

The 2022 French presidential election arguably had more significance than ever during the war in Ukraine, something Macron also addressed in his speech.

“The war in Ukraine is there to remind us that we are going through tragic moments in which France must make its voice heard, show the clarity of its choices and build its strength in all areas. And we will,” he said.