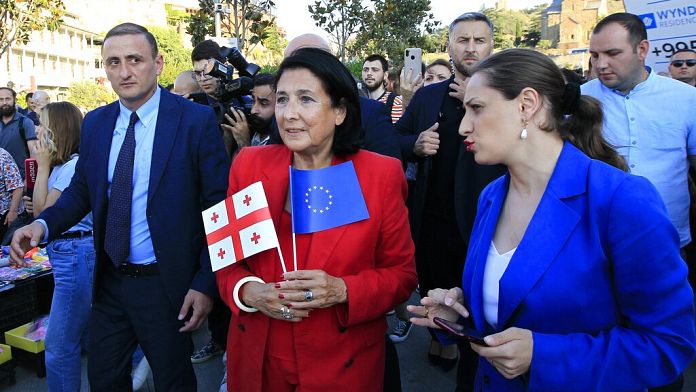 Lawmakers in Georgia have been left heartbroken after Brussels dashed the country’s hopes of a quick entry into the European Union (EU).European Commission president Ursula von der Layen announced Friday that Georgia would only move to EU membership candidate status after addressing certain priorities. The Commission instead recommended a “European perspective” for the small Black Sea nation, unlike Ukraine and Moldova which were awarded candidacy status. “Georgia shares the same aspirations and potential as Ukraine and Moldova,” said von der Layen. “Its application has strengths, in particular the market orientation of its economy, with a strong private sector. “To succeed, the country must now come together politically to design a clear path towards structural reform and the European Union,” she added. The Commission would “come back and access” whether Georgia had met “a number of conditions before granting it candidate status,” said von der Layen, without specifying when this would be. According to a European Commission document, the country must address internal political polarisation, commit to “de-oligarchisation” and carry out judicial reforms before it can join the bloc. Press freedoms and the accountability and transparency of state institutions also need to be improved, added the EU’s executive body. Leader of the ‘Georgian Dream’ party, which holds the majority in Georgia’s parliament, Irakli Kobakhidze described the Commission’s decision as “heart-breaking”. “We do realise that Georgia, unlike Ukraine and Moldova, has not made necessary sacrifices today,” said Kobakhidze.  “The sacrifices and bloodshed 14 years ago, or even 30 years ago and 300,000 internally displaces persons, unfortunately, have already lost their relevance for our European partners,” he added.  His comments were made in reference to the 2008 Russian-Georgian war and the Moscow-backed separatist region of Abkhazia, north of the country.Opposition figures in Georgia used the Commission’s verdict to criticised the government. Giga Bokeria, who heads the ‘European Georgia’ opposition party, said the current “regime” was incompatible with the country’s EU aspirations. Meanwhile, Nika Melia, leader of the United Opposition Movement, accused the government of deliberately hindering Georgia’s Euro-Atlantic path.Other politicians were more optimistic. “I want you to fully understand that Europe did not abandon us,” said president Salome Zourabichvili. “Our European perspective got recognised. This is something that hasn’t happened before. “Now we have a list of priorities which need to be addressed, and this is the responsibility of government, as well as the opposition,” she continued.Frustrations over the ruling were felt in some quarters of the Georgian capital, Tiblisi, with many locals describing it as difficult to hear. “I really didn’t like the decision, everyone was saying yes, and now this is what we got, said Lia Partskhaladze, 70, who is a chemist. “We deserved candidacy.” Although it would be “better if they granted the candidacy,” Lekhso Khalidashvili, 25, said the decision should encourage Georgian lawmakers to do more. “There’s still a lot to be done to achieve the required level, [but] that’s the path we have to take for sure,” said the engineer. In 2021, the Georgian government announced its intention to apply for EU membership 2024. This was brought forward to “immediately” after the Russian invasion of Ukraine in February 2022.