‘Left behind’: How war is hitting the disabled in Ukraine 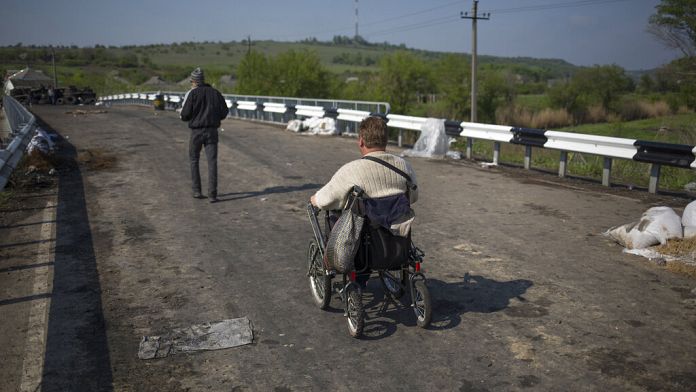 In July, Russian mortars rained down on a psychiatric home in northern Ukraine, while dozens of elderly and disabled residents were sleeping.Flames soon swept through the facility’s dining room, and its dormitory and administration buildings were wrecked. Miraculously, only three people were injured.But it marks the latest in a series of deadly attacks in which some of Ukraine’s most vulnerable have been caught up in a savage conflict far beyond their control.Before the Russian invasion, there were around 2.7 million people with some form of physical or intellectual disability in Ukraine, according to Inclusion Europe, an EU disability organisation.The violence and destruction that ensued after Russian tanks rolled across the border have only strained what was described as an already “dire situation” for these men, women and children. “People with disabilities were under pressure before the war, experiencing prolonged stigma, isolation and barriers to accessing community support,” said Inclusion Europe. ‘They cannot leave’Although exact statistics are hard to come by, many of Ukraine’s disabled — especially those with the most severe disabilities — have not been able to flee the war and are struggling to find safety. According to Karolina Kozik, an assistant researcher at Human Rights Watch, one reason is that many disabled people need special accessibility cars or ambulances, which are not readily available in a war zone, to take them to safety.She said her organisation was “very concerned” about the fate of the tens of thousands of disabled people living in residential institutions, such as orphanages or care homes.“People who live in these institutions are really segregated from their communities, they are really living behind closed doors,” she said. “They seriously risk being left behind.”In July, footage emerged of disabled children living in squalid, inhumane conditions, with some tied up and restrained, under the watch of powerless staff who are unable to evacuate them.What has made matters worse, claims Yuliia Sachuk from Fight for Right, a Ukrainian disability charity, is that Ukraine’s disabled were “overlooked” in the country’s evacuation plans before conflict broke out. “Both national and local authorities did not pay enough attention to the needs of people with disabilities when planning escape routes and evacuation corridors,” she told Euronews, adding that her organisation has been helping with evacuations and medical services “without any support”.Ukraine’s cabinet of ministers says it extended all social benefits, including disability and care allowance for persons with intellectual disabilities, and coordinated the efforts of ministries to evacuate them, including those placed in boarding schools, psychoneurological and other institutions.‘It can be difficult for them to understand what’s happening’Both disabled people and the elderly face serious risks in any armed conflict — and Ukraine is no exception.When violence does erupt on their doorstep, Kozik says people with physical disabilities, especially those in wheelchairs, may be unable to escape or access bomb shelters, while those with hearing difficulties cannot heed warning sirens when the shooting starts.Even if people with physical or intellectual disabilities are spared the direct brush of conflict, they seldom escape the impacts of war.“The mental health impact of any conflict on anyone is enormous,” Kozik told Euronews. “For people with disabilities, it can cause even more trauma and psychological distress.”“For example, for some people with intellectual disabilities it might be difficult for them to understand what’s happening and any change in their everyday life can have an enormous impact on mental health and well-being.”On 1 March, a shell hit the V. Korolenko boarding school for blind children in Kharkiv, Ukraine’s second-largest city in the northeast.”Glass shards flew everywhere, children fell to the floor, they were terrified,” said Valentina Butenko, the director of Right to Choose, a group that works with disabled Ukrainians. “One girl was injured, and the director of the school sustained a head wound from a glass shard. All the schools’ children have since been evacuated.”Owing to their conditions, disabled people struggle to access vital services and humanitarian aid during wartime, though both Ukraine and Russia are obligated under international law to ensure their safety.In this void, care responsibilities fall on their families, especially mothers, according to Inclusion Europe, which said they are mostly “just stay[ing] in their homes hoping for the best”.“Unfortunately, as horrible as it might sound, people with disabilities are often an afterthought in these kinds of situations. They are a marginalised group, even when there is no war going on,” said Kozik.“It’s a humanitarian crisis within a crisis,” she added.