Putin says Tchaikovsky will be canceled. The Met Opera disagrees. 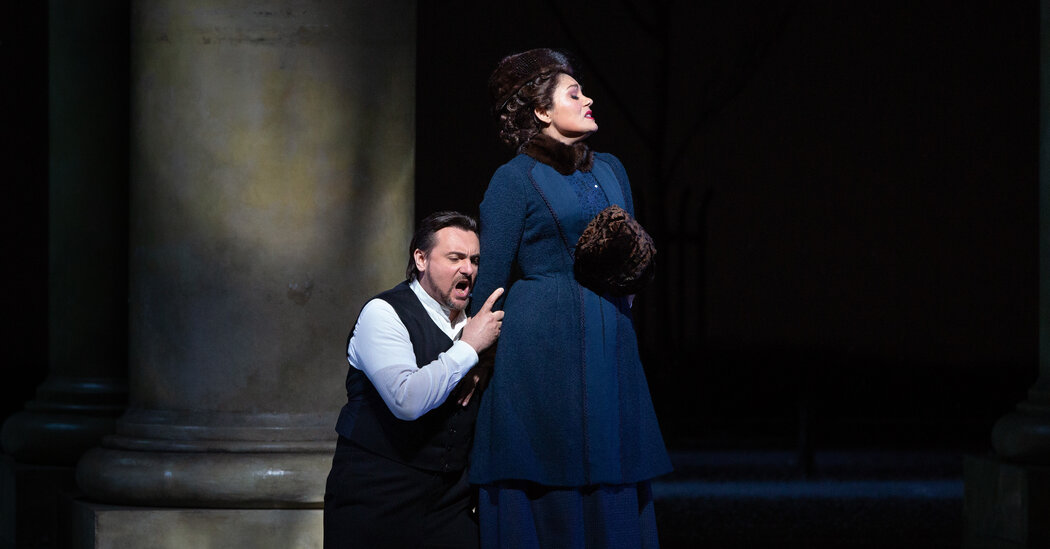 The opera, once divided into local companies of singers mostly from the same country, with the advent of air travel has blossomed into a completely international art form. French, German and Italian opera houses have begun to host artists from all over the world.

It has become easy to take it for granted. But in the wake of the Russian invasion of Ukraine a month ago, it seems extraordinary – almost heroic – that the Metropolitan Opera staged Tchaikovsky’s “Eugene Onegin” with a Russian, Ukrainian, American, French, Armenian, Polish and Estonian cast. . (And these are just the featured players.)

The craftsmanship and care put into this renaissance of one of Russia’s largest cultural exports dispels the cynical accusation that the West is in an erasing frenzy. “The names of Tchaikovsky, Shostakovich and Rachmaninoff have been removed from the posters,” Russian President Vladimir V. Putin said on television on Friday.

It doesn’t matter that “Eugene Onegin” opened at the Met that night, while the New York Philharmonic was playing Shostakovich across the street. And later this week the Philharmonic performs three concerts by Rachmaninoff and Prokofiev, with Rimsky-Korsakov and even more Rachmaninoff the week after. As with so many narratives about the culture of nullification, this one is about fostering a sense of resentment, not facts.

But biased as they were, Putin’s comments – and his war – were impossible to forget on Friday. And as with so much Russian opera at the Met, it was difficult to see this performance without thinking of the conductor Valery Gergiev, so closely identified with this repertoire in New York, and on the podium for the premiere of Deborah Warner’s sad “Onegin”. staged when it opened the season in 2013.

Even then, Gergiev faced protests over his ties to Putin, as did soprano Anna Netrebko, the first woman in power of the house, who sang Tatiana. Now both of their international careers are in chaos and it seems unlikely that either of them will ever appear at the Met again because they refused to distance themselves from the Russian president; Gergiev appeared with Putin on Friday via video link.

When they came to my mind during “Onegin”, it was with feelings of anger, sadness and disappointment, as well as with memories – of Gergiev’s sweaty intensity at his best, and Netrebko’s generous generosity of tone and presence towards him. .

Even for the performances of 2013, however, it was not the best time. On Friday soprano Ailyn Pérez, singing Tatiana for the first time, made a more memorable impression on her part than her predecessor.

Pérez’s voice is less sumptuous than Netrebko’s, but it is more convincing as a girl, suited to a character in his thirties. She didn’t go overboard with Tatiana’s bookish shyness, or her anxious crush on Onegin, but made those qualities audible in the tightly vibrating, almost trembling shimmer of her high notes and the soft-grained modesty of her low range. In the final act, set a few years after the first two, her sound hardened enough to convey a disillusioned femininity.

While Netrebko had a hard time getting his dense voice to float, Pérez sometimes lacked the tonal wave to fill the big lines in what is a heavier chant than the lyrical roles – such as Mimì in “La Bohème” and Micaëla in ” Carmen “- for whom he was best known at the Met. So the big letter scene was more tender than ecstatic, and Tatiana’s final confrontation with Onegin was not entirely won. But as in his solo turn performing Verdi’s Requiem at the Met last fall to commemorate the 20th anniversary of the 9/11 attacks, his urgency and commitment to the text helped offset any lack of elegance. .

The orchestra needs to fuel the intensity of this work, and under James Gaffigan the stakes were low. It lacked the heavy ferocity of the end of Act II’s first scene and the wild currents as a whole as the letter scene reaches its climax. Sometimes, as in a polonaise con brio at the beginning of the Act III dance, the vivacity was just right; at times he seemed lively but faceless, just too light.

The sound had been more lush and silky on the previous Saturday, when Puccini’s “Madama Butterfly”, which runs until May 7, was reprized in the company, directed by Alexander Soddy. As in “Onegin” (until April 14) the protagonist sang the role of her for the first time – and as with Tatiana di Pérez, Butterfly is the entry of soprano Eleonora Buratto in heavier parts to the Met; she will sing Elisabetta in Verdi’s “Don Carlo” this fall.

And like Pérez, Buratto was convincing as a teenager, his acting reserved and his gentle tone. He started “Un bel dì”, Butterfly’s great outpouring of illusory hopes, not as if she were taking on a grandiose but casual air, flowing naturally out of the conversation. And after the immense challenge of that number, his voice seemed to relax, becoming wider and bolder.

With “Addio, fiorito asil”, towards the end, the voice of tenor Brian Jagde as the caddish Pinkerton had compiled under his top notes, confident and burnished from the beginning; Elizabeth DeShong reprized her powerfully sung Suzuki.

In “Onegin”, Pérez was joined by the baritone Igor Golovatenko, with a firm and strong tone, like Onegin. The tenor Piotr Beczala was as ardent but elegant as the condemned Lenski; veterans Elena Zaremba and Larissa Diadkova were hot in small roles.