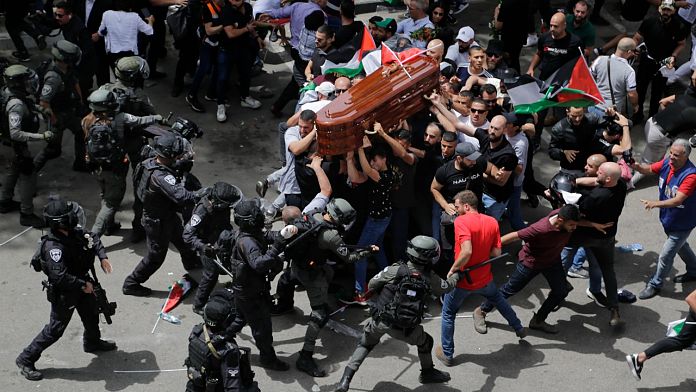 On Saturday, Israeli police decided to investigate the conduct of its officers who attacked the funeral of a killed Al Jazeera journalist, briefly dropping the coffin during the ceremony in Jerusalem.

Police beat coffin bearers with batons at the start of Shireen Abu Akleh’s funeral procession on Friday, who according to witnesses was killed by Israeli troops on Wednesday during a raid in the occupied West Bank. The Israeli army says Palestinian gunmen were in the area and it is unclear who fired the fatal bullet.

The shocking scenes of the funeral and the death of the 51-year-old Palestinian-American journalist have sparked worldwide condemnations and requests for investigation, including from the United States and the United Nations.

In a statement Saturday, Israeli police said their commissioner has commissioned an investigation that will conclude in the next few days, adding that the organization “will draw lessons from the incident.”

Police say they used force while hundreds of “rioters tried to sabotage the ceremony and harm the police.”

The attack on the funeral added to a sense of grief and indignation that followed the death of Abu Akleh, a veteran journalist and a household name across the Arab world. They also illustrated the deep sensitivity about East Jerusalem, which is claimed by both Israel and the Palestinians and has sparked repeated rounds of violence.

Before the burial, a large crowd gathered to escort his coffin from an East Jerusalem hospital to a Catholic church in the nearby Old City. Many of the mourners held Palestinian flags and the crowd started shouting, “We sacrifice our soul and blood for you, Shireen.”

Soon after, the Israeli police relocated, pushing and beating the mourners. When helmeted riot police approached, they hit the coffin bearers, causing a man to lose control of the coffin as he fell to the ground. Police snatched Palestinian flags from people’s hands and fired stun grenades to disperse the crowd.

On Friday, Secretary of State Antony Blinken said the US administration was “troubled by images of Israeli police intruding on the funeral procession” of Abu Akleh, who was also a US citizen. “Every family deserves to rest their loved ones in a dignified and unhindered way,” he tweeted.

A unanimous condemnation arrived on Friday from the United Nations Security Council, which in a rare statement called for “an immediate, thorough, transparent and impartial investigation into his killing”.

The Palestinian Authority and Al Jazeera, who have long had a strained relationship with Israel, have accused Israel of deliberately killing Abu Akleh. Israel denies the allegations.

She was shot in the head Wednesday morning during an Israeli military raid in the West Bank city of Jenin.