The Queen’s funeral: following in a long tradition of state ceremonies 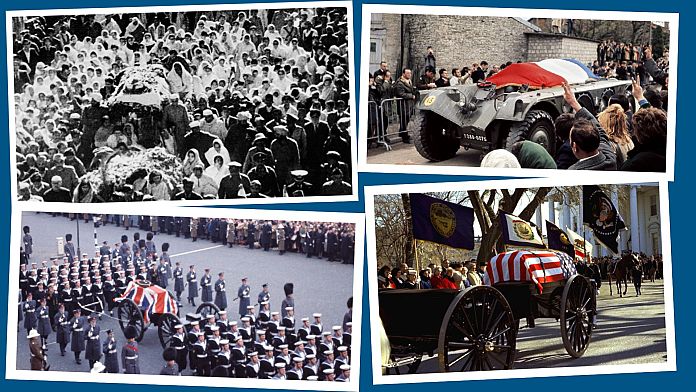 Queen Elizabeth II’s state funeral at Westminster Abbey in London will be attended by royalty, heads of state and dignitaries from around the world.London’s police force says the event will be the biggest security operation it has ever undertaken.But how will the funerals of other world leaders compare to that of Britain’s longest-serving monarch?Mahatma GandhiThe cremation of India’s Mahatma Gandhi took place on the banks of the river Jumna on the 10th of February 1948.Two million people, from all walks of life, assembled for the ceremony.The beloved non-violent leader helped free the country from British rule.He was shot several days earlier by a Hindu nationalist in the compound of Birla House, in New Delhi.John F. KennedyThe State funeral for John F. Kennedy took place on the 25th of November in1963.The American president had died three days earlier, assassinated in Dallas.His body was brought back to Washington soon after his death. His flag-draped coffin, lying-in-state was viewed by hundreds of thousands of mourners.The murder caused a wave of emotion throughout the world.Many leaders travelled to Washington to attend his funeral.The day after the assassination, Vice President, Lyndon B. Johnson took office as the 36th President of the United States.Winston ChurchillState funerals in the UK are usually reserved for kings and queensHowever, Winston Churchill’s important role in the twentieth century made him the exception.The former wartime Prime Minister died on the 24th of January 1965 in London and was buried a week later.His funeral was broadcasted live on the BBC – the British Broadcasting Company and became the biggest national event since the Coronation of Queen Elizabeth II in 1953.Charles de GaulleLeaders from across the globe gathered on the 12th of November 1970 in Paris’ Notre-Dame Cathedral to pay their respects to former French President, Charles de Gaulle.The statesman led France against Nazi Germany during World War II and later rewrote the Constitution of France and founded the Fifth Republic.While de Gaulle did not want a national funeral, his burial became the biggest event in French history and was attended by many world leaders including US President Richard Nixon and Queen Juliana of the Netherlands.Pope John Paul IIMore recently, countless officials, political and religious figures as well as religious followers were present at Pope John Paul II’s funeral in Rome on the 8th of April 2005.He was head of the Catholic Church for 26 years.At the time it was the single largest gathering of heads of state in history outside of the United Nations and surpassed the funeral of Winston Churchill.The body of the Pope was exposed as it lay-in-state, first, in the Papal Residence and later in St. Peter’s Basilica in the Vatican.Nelson MandelaAnd on December the 15th 2013, people were moved across the globe by the death of Nelson Mandela, the first black head of state of South Africa.The funeral for the anti-apartheid leader and winner of the Nobel Peace Prize was held in Qunu in the Eastern Cape following an official service at the FNB stadium in Johannesburg.It was attended by some 4,500 people including many world leaders and foreign dignitaries.