This week in pictures: volcano eruption, continuous heatwave and wildfires in Europe 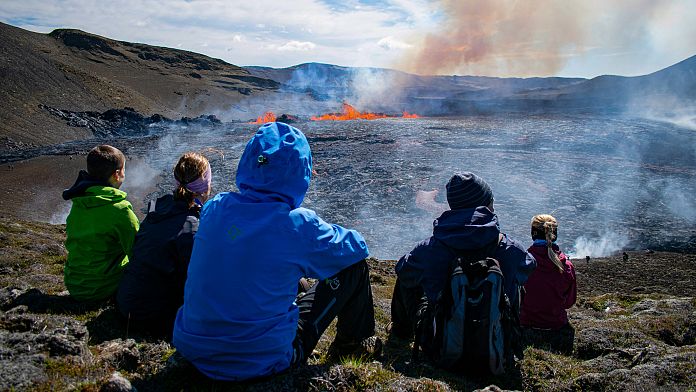 This week Iceland witnessed a massive volcano eruption, Spain continued battling its wildfires while Europe suffered from another heatwave, and residential areas were once again hit in different parts of Ukraine amid the Russian invasion of the country.This is how these and other stories this week were captured by photojournalists around the world. Lava flowing from Fagradalsfjall volcano 32 kilometres southwest of the capital of Reykjavik, Iceland. August 3, 2022Marco Di Marco/AP PhotoBurnt cars are seen after a wildfire near the village of Verin, northwestern Spain. August 4, 2022Miguel Riopa/AFPNina Grandova visits her disabled husband, Yurii, in the basement of their building where he has been living since the Russian invasion began on February 24, in KramatorskDonetsk region, eastern Ukraine. August 2, 2022 David Goldman/AP PhotoRescuers putting out a fire caused by shelling in a wheat field in Donetsk region, amid the Russian invasion of Ukraine.Ukrainian emergency service via AFPA couple reacts after Russian shelling in Mykolaiv, Ukraine, Wednesday, Aug. 3, 2022. According to local media, a supermarket, high-rise buildings and a pharmacy were damaged.Kostiantyn Liberov/AP PhotoA woman places a bouquet of flowers where Nigerian street vendor Alika Ogorchukwu was murdered, in Civitanova Marche, Italy, July 30, 2022Chiara Gabrielli/AP PhotoA large sinkhole that appeared over the weekend near the mining town of Tierra Amarilla, Copiapo Province, in the Atacama Desert in Chile. August 1, 2022Johan Godoy/AFPTightrope walker Nathan Paulin walks on a slackline between the right and left banks of the city during an event marking the Swiss National Day on August 1, 2022.Gabrial Monnet/AFPA woman cools off on Sant Pere Pescador beach, Girona, Spain. August 1, 2022Emilio Morenatti/AP PhotoPeople enjoy the hot summer weather at the ‘Isar’ river banks in Munich, Germany. August 3, 2022Matthias Schrader/AP PhotoThe aerobatic team perform during the Pyramids Air Show 2022 at the Giza Pyramids Necropolis on the southwestern outskirts of the Egyptian capital on August 3, 2022Mahmoud Khaled/AFPSeaweed covers the Atlantic shore in Frigate Bay, St. Kitts and Nevis. August 3, 2022.Ricardo Mazalan/AP PhotoThe crescent moon is seen next to the Christ The Redeemer statue in Rio de Janeiro, Brazil. August 1, 2022.Mauro Pimentel/AFP