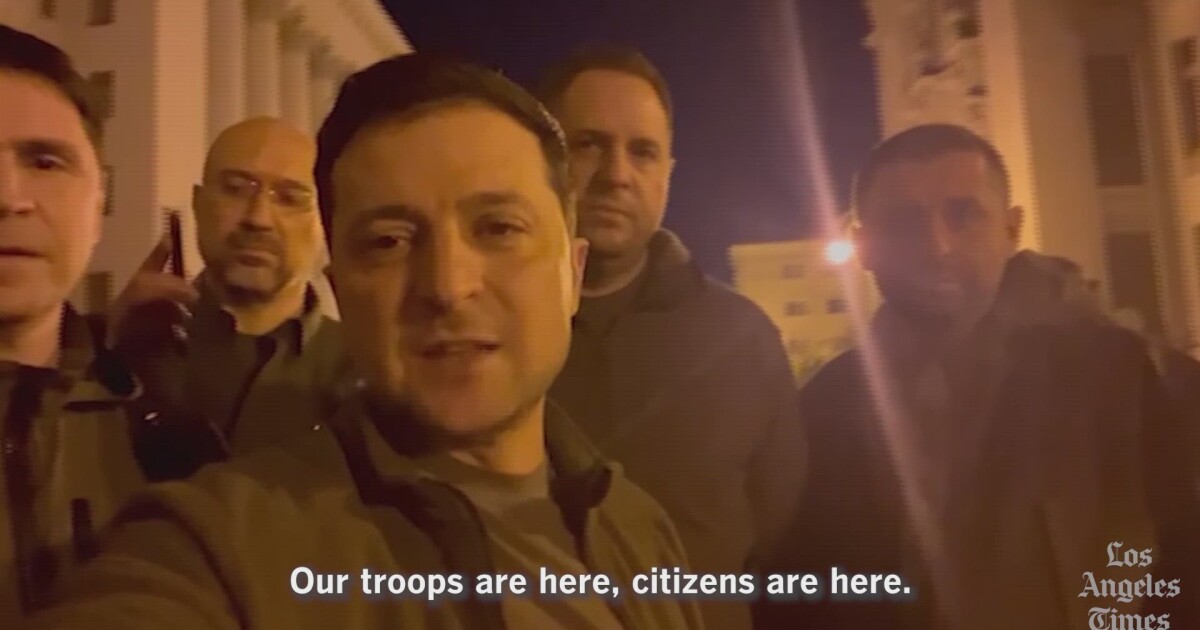 A snowy sidewalk littered with bloody bodies. A beleaguered president roaming the streets of an embattled country. missiles stream. sirens wail. Teens build homemade bombs. And dead soldiers, so many of them, lie crumpled in fields and slumped in smoldering tanks.

Russia’s invasion of Ukraine has spawned a steady stream of online content, a deluge of audiovisual media that has countered Moscow’s disinformation campaign, spurred global leaders to action and contributed, as they have in other recent conflicts in Syria and Ethiopia, to change the way we see and understand war.

The bombings and violence in cities like Mariupol, Kharkiv and Kyiv showcase a slew of new stars – social media standouts who rely on satire, bravery and the sensitivity of an insider to document the horrors for a global audience.

President of Ukraine Volodymyr Zelensky has become the most famous and tireless online presence with his compelling daily updates via instant messaging platform Telegram. But there are many others including Illia Ponomarenkoa journalist who amassed more than 1 million Twitter followers for his play-by-plays of military operations, and Vitaly Klitschkothe mayor of Kyiv and a former heavyweight boxer who delivers cables after bombings.

They offer a fast-paced stream of consciousness in a moral game where ancient brutality meets raw, digitized immediacy. They are influencers amidst the ruins, defiant voices echoing from battlefields and bunkers.

Zelensky’s recent description of Russia’s relentless siege of Mariupol as “a crime against humanity … happening before the eyes of the entire planet in real time” seizes on what distinguishes the Ukraine conflict from many wars of the past: instant documentation.

In February, although Russia denied planning an attack, hints of the impending siege were registered on TikTok, where users posted hundreds of videos showing Russian military vehicles gathering along the Ukrainian border.

On Telegram, Twitter and Instagram, Ukrainians have raised money for refugees, organized the evacuation of civilians from hard-hit regions, and recorded horrors such as the March 10 bombing of a Mariupol maternity hospital, where bleeding pregnant women were evacuated on stretchers.

The war in Vietnam was often referred to as the “first televised war,” a technological advance from two world wars decades earlier that had been recorded primarily through printed words and photos. At the beginning of this century, the conflict in Iraq was still largely filtered out by journalists and documentary film crews.

The Arab Spring of 2011 was widely seen as the first revolutionary movement to be launched on social media. But the apps then used to spread riots — namely Twitter and Facebook — have evolved significantly in the years since, while new platforms more geared toward video sharing have flourished. At the same time, the capabilities of the typical cell phone have expanded to the point where anyone can become an auteur filmmaker.

Instant communication “has a direct impact on how Western countries react to the February 24 invasion, and the reason it has this effect is because ordinary people are seeing what’s happening en masse,” she said.

She compared the war in Ukraine to the Soviet-era artificial famine imposed on Ukraine by Moscow in the 1930s, which killed more than 4 million people. “The facts of the genocidal famine did not reach Western audiences,” she said. “And so Ukraine was left to its own devices.”

That is not the case today. While it’s not always easy to separate fact from fiction on social media, there’s no question that the power and moral clarity of the many voices coming out of a once-peaceful nation of 44 million made the crisis impossible. Some critics have argued that the social media feeds of white Europeans engaged in conflict have attracted more attention than similar documentaries of atrocities from Syria or African countries.

The drama of the agitated – as it has been since Homer’s “Iliad” – is captivating. Consider Klitschko, the boxer-turned-mayor, and the videos of him touring the scenes of deadly strikes. As he walked down a rubble-filled street in Kyiv earlier this month, he trained his phone camera on a destroyed apartment building, a bombed-out city bus and the crater where the munitions hit. “These pictures [are] the truth,” he said in english. “This is what Putin’s war looks like.”

Ponomarenko, a Kyiv Independent journalist embedded in Ukrainian forces, has covered the fighting with a mixture of pain and awe. “One, two, three, four Russian tanks knocked out,” he said in a recent clip as he panned over the smoking wreckage of militarized vehicles. “Now that’s what I call a good day.”

On TikTok, young people have built a huge following with their simple explanations of war and their documentation of everyday life in underground bomb shelters. A recent viral video showed a civilian carefully removing a landmine from a highway, a cigarette hanging from his lips.

And then there’s Zelensky, a former comedian who was elected president in 2019 and is made up of equal parts Jon Stewart and Winston Churchill. He seems to embody the spirit of the nation: exhausted but still upright and adamant in his demands that the West do more to help Ukraine in what he has described as a clear choice between good and evil.

“We live in an extremely media-sensitive time where people are very attuned to cues of authenticity,” Kotlyarenko said. “Zelensky comes across as very serious and somehow vulnerable, but strong at the same time.”

The president’s cables, which he posts on Telegram every few hours, are part of a larger world of Ukrainian content that has helped counter Russia’s widespread disinformation campaign, experts say.

Just as it attempted to influence the 2016 presidential election in the United States, Russia has been spreading fake news about its war against Ukraine to sow confusion.

Claims have been circulated that neo-Nazis rule Ukraine and that the US is developing chemical and biological weapons in Ukraine for use against Russian troops. She has alleged that the pregnant women bombed in the Mariupol maternity ward were in fact actors in the crisis. “Very realistic makeup,” the Russian embassy in Britain wrote in a Twitter post that was later deleted.

“They create a few different narratives and they don’t care which ones stick,” Lytvynenko said. “The goal is to cloud people’s thinking about war, make it seem like it’s too complicated for them to understand, so they tune out or change the conversation.”

At home, Russia has not even acknowledged that a war is taking place, considers its military attack on Ukraine a “special operation” and threatens jail to anyone who says otherwise.

The adage that truth is the first casualty of war also plays out on many platforms across cyberspace.

In the early days of the war, Facebook Gaming showed videos presented as live footage of attacks on Ukraine, which turned out to be from a military video game. On TikTok, many accounts included an audio clip of Ukrainian soldiers berating a Russian warship that was urging them to surrender – with the text saying the soldiers had died. They lived.

“Even for experienced journalists and researchers, it is difficult to distinguish the truth from rumours, parodies and fakes,” says a report by Harvard researchers who studied TikTok’s impact on the war.

Aware of such manipulations, the Biden administration recently invited several prominent TikTok producers to a briefing on the war, hoping they would help disseminate accurate information. “We recognize that this is an extremely important way to update the American public with the latest information. So we wanted to make sure you were getting the latest information from an authoritative source,” an official said, according to a recording of the meeting obtained by The Washington Post.

But disinformation continues to spread.

A manipulated video circulated a few weeks ago in which Zelenskyy appeared to be asking his soldiers to lay down their arms. Zelensky quickly went to Telegram to denounce it. A few days later, another fake video surfaced, in which Russian President Vladimir Putin announced peace with Ukraine.

The war, of course, continued, both on the battlefield and online.