Ukraine war: What you need to know this Thursday 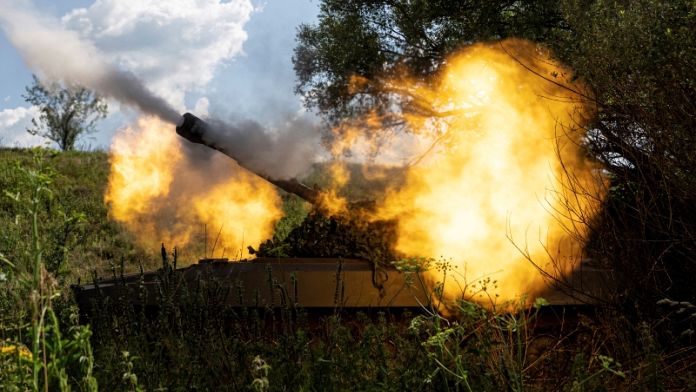 Russian hits Kyiv for first time in weeksThe Russian army has launched a missile attack on the Kyiv and northern Chernihiv regions for the first time in weeks today.At least fifteen people, including five civilians, were reportedly injured in the Russian strikes, according to the Ukrainian capital’s regional governor, Oleksiy Kuleba. Russia attacked the Kyiv region with six missiles launched from the Black Sea, hitting a military unit in the village of Liutizh on the outskirts of the capital, according to Oleksii Hromov, a senior official with Ukraine’s General Staff.He said that the attack ruined one building and damaged two others, and that Ukrainian forces also shot down one of the missiles in the town of Bucha.The attack on Chernihiv, which targeted the village of Honcharivska, is believed to have come from Belarus, as stated by regional governor Vyacheslav Chaus.Ukrainian officials, meanwhile, announced a counteroffensive to take back the occupied Kherson region in the country’s south, territory seized by Russia shortly after the invasion.National media in Ukraine has quoted the presidential adviser, Oleksiy Arestovich, who confirmed that Kyiv’s plans to liberate Kherson were under way and that the Ukrainian army plans on leaving Russian troops with the three options – to “retreat, if possible, surrender or be destroyed.”Read more:US claims more than 75,000 Russian soldiers killed or injuredMore than 75,000 Russian soldiers have been killed or injured since the Kremlin invaded Ukraine on February 24, according to US intelligence estimates.A congresswoman who recently visited Ukraine confirmed that the figures had been relayed in a briefing from the US Department of State, Department of Defense, the Joint Chiefs of Staff and the Office of the Director of National Intelligence.Speaking to CNN, Michigan Republican Elissa Slotkin said: “We were briefed that over 75,000 Russians have either been killed or wounded [in Ukraine], which is huge…over 80% of their land forces are bogged down, and they’re tired,” she said.Russia has remained tight-lipped about its casualties in Ukraine One top Russian lawmaker claimed in June its soldiers had essentially stopped dying in the war, even with fighting raging. Andrey Kartapolov, head of the Russian parliament’s defence committee said that “we have practically ceased to lose people,” according to Moskovskij Komsomolets, a Moscow-based paper.Euronews cannot independently verify these figures. Outrage at pro-Putin chants at Turkey-Ukraine football matchUkrainian officials have expressed their anger at Turkish football fans who chanted at Vladimir Putin’s name at a Champions League kick-about in Istanbul.Thousands of Fenerbahce supporters joined in the chant after their team conceded a goal to Ukrainian champions Dynamo Kyiv.Ukrainian Ambassador Vasyl Bodnar said the incident had “saddened” him deeply, with one football journalist branding the chart “absolutely tasteless.”Footage of the controversial chant has been viewed more than seven million times on social media.  “We will never understand the words of support for the Russian killer and aggressor who deliberately kills Ukrainians and destroys our country,” Bodnar wrote on Facebook. “Even football, which is so loved in Turkey, has its limits.”Dynamo Kyiv won the match 2-1, having drawn 0-0 in the first leg played in Poland because of Russia’s invasion.Competition organiser Uefa told the BBC that it has opened an investigation into the incident.’Double standards’ in treatment of non-Ukrainian refugees, finds expertPoland has been accused of double standards in its treatment of Ukrainian refugees,  compared to non-Europeans fleeing conflicts in Africa and the Middle East, by an UN expert. Those affected include permanent residents of Ukraine, “undocumented” migrants and people who had sought asylum in the country before the war forced them to flee again, said Felipe González Morales, United Nations Special Rapporteur on the human rights of migrants on Thursday.”Even for those that have fled the same war, although all were accepted for entry into Poland and have received assistance from the State, third country nationals are not protected under the same legal framework,” he said. “This double standard approach has led to feelings of being discriminated.” González Morales did commend Poland for hosting some 2 million Ukrainian refugees who have come to the country, granting them permission to work, as well as access to health care, education and other public services.“This explains why I do not see refugee camps in Poland,” he said. Belarus opposition leader condemns attacks on Ukraine launched from her countryThe Belarusian opposition leader, Sviatlana Tsikhanouskaya, has condemned the latest escalation in the war in Ukraine launched from Belarus.“Horrified to see how Russia continues to use Belarus to attack Ukraine,” she tweeted. “At least 25 missiles were launched from Belarus targeting Kyiv, Chernihiv and other cities this morning. Lukashenka can’t fool anyone. He is guilty of crimes against Belarusians and Ukrainians and must be held accountable.”